Freedom for Fonseka in January? 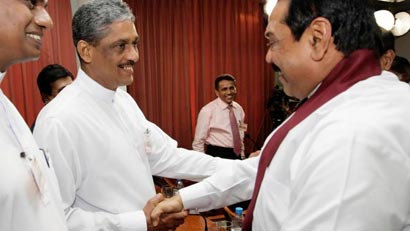 Imprisoned former Army is to be freed early next year on a presidential pardon, ‘Lankadeepa’ reports.

The newspaper says he will most likely be released on January 01, under the powers vested in the president through the constitution.

Religious leaders, including the Mahanayake Theras of Malwatte and Asgiriya Chapters, have asked the president to release Mr. Fonseka.

The ex-Army chief lost his parliamentary seat and sentenced to 30 months in prison by a military court which found him guilty in charges relating to military supplies by Hicorp company owned by his son-in-law Danuna Tilakaratne.

He was given a further three years in prison after courts found him guilty in the ‘white flag’ case.

24 Responses to Freedom for Fonseka in January?

Home » Freedom for Fonseka in January?