We are working extremely hard – Dilshan 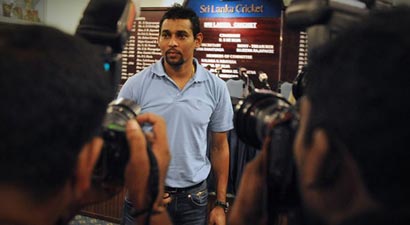 Sri Lanka captain Tillakaratne Dilshan says his batsmen are working extremely hard to come out of the batting slump and need to take more responsibility to produce results in Test cricket. Sri Lanka were crushed by South Africa by an innings and 81 runs at Centurion on Saturday as they lost the Test inside three days.

None of the Sri Lankan batsmen were able to post a half-century as the tourists were shot out for 180 runs in the first innings and then again for 150 in the second. With the game ending with two days to spare, the tourists will remain in Centurion and decided to have two net sessions before leaving for Durban on Tuesday.

“We are working extremely hard in the nets and doing everything possible. We need to carry whatever we do at the nets to the middle to be successful. We need to take the responsibility as a batting group. We have guys with excellent batting records, but as a batting group we haven’t unfortunately clicked,” Dilshan, who has now gone through ten Test Matches without winning one said.

Sri Lanka’s overall record is even more disappointing as they have failed to win a Test in 18 months having gone through 15 Tests without tasting victory.

“Our batting hasn’t clicked in the last four series and the same thing happened here. We recovered to reach 150 for four in the first innings, but we collapsed to be bowled out for 180 runs. This Test has been a big letdown for us,” Dilshan further said.

The conditions were hardly to their liking as well as the Test was played on a wicket where there was live grass and to make things worse, Dilshan lost the toss and was forced to bat under overcast conditions, making it ideal for seam bowlers.

“I told you all before the Test Match started that this is going to help the fast bowlers and that’s what happened. The other issue was that the bounce wasn’t consistent. There was two paced bounce and it was difficult to bat,” Dilshan added.

The positive for Sri Lankans was the way their seam bowlers performed, particularly in the first two sessions of day two. Dilhara Fernando in particular troubled the batsmen with extra pace and was unlucky to have two catches dropped off his bowling.

“The bowlers did very well. At one point, we felt like that we could bowl them out for about 250. But missing about four chances was disappointing. I thought the bowlers did a tremendous job especially Dilhara. Had we got around 300 runs in the first innings, we could have put them under pressure with the way we bowled,” Dilshan added.

Dilshan also said that the team was missing injured wicketkeeper batsman Prasanna Jayawardene, who has scored two hundreds this year and has been team’s second best batsman after Kumar Sangakkara averaging more than Mahela Jayawardene, Thilan Samaraweera and Dilshan in 2011.

“He was Man of the Series in England for us and along with Sanga, he has been getting us a lot of runs. But unfortunately he fell ill and we had to give young Kaushal Silva an opportunity. Prasanna is an experienced guy as well and it’s disappointing that we don’t have his services,” Dilshan added.

10 Responses to We are working extremely hard – Dilshan