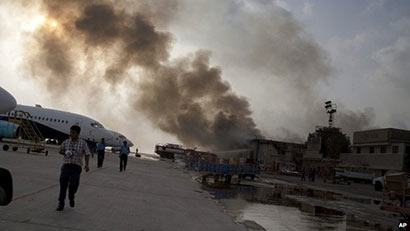 A fierce gun battle has erupted close to Pakistan’s busiest airport in the city of Karachi, a day after militants stormed one of its terminals.

Local media say gunmen have attacked a training camp of the airport security forces. It is not clear if there are any casualties.

Flights have once again been suspended at the airport, officials say.

The Taliban gun and bomb attack on the airport’s cargo terminal left at least 38 dead, including the attackers.

It appears as if this latest attack is focused upon a hostel housing the airport security forces.

There are reports that rocket-propelled grenades were fired after several militants pulled up in a vehicle.

Ambulances were seen rushing to the scene and local media reports say that gunfire can still be heard.

The Taliban have said that they carried out the latest attack.

The death toll from the airport raid rose sharply overnight after nine more bodies were discovered, seven of them in a cold storage facility.

This latest violence comes against the backdrop of a major split in the Pakistani Taliban, and threats of retaliation following military operations against Pakistan’s tribal north-west.

It has brought the government of the prime minister, Nawaz Sharif, under renewed pressure to order tough action against the Taliban, correspondents say.