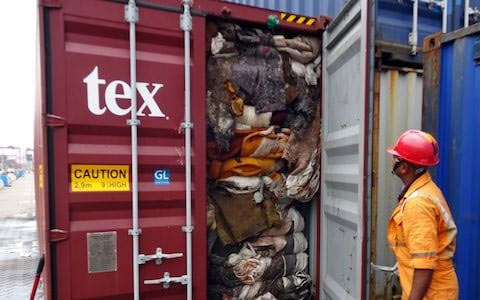 The HFZC is mired in controversy for bringing down 130 containers full of garbage from overseas. Meanwhile, the CEA has decided to institute legal action against the HFZC for  failing to obtain the licence required for its activities in the FTZ.

Director General of CEA, Hemantha Jayasingha explaining the matter to Ceylon Today said these details had come to light following a probe conducted by them.

He said all business enterprises engaged in operations in the FTZ have to apply through the Board of Investments (BoI) to obtain a licence from the CEA.

However, Jayasingha said the HFZC had carried out operations at the FTZ since 2017 sans the Environmental Protection Licence.

“The BoI must be held responsible for this. Since all firms engaged in business ventures in the FTZ have to apply for this licence through the BoI and when we get it,  we begin our work in this regard,” he said.

Jayasingha said the British High Commission in Colombo has already informed them that the British Government will support the probe undertaken by the CEA.

He said he had received an e-mail from the British Environment Authority. They had sought details regarding the serial numbers of the containers and other details pertaining to it.

He added that the Basel Convention was violated when the containers were brought down and that the CEA has already lodged a complaint in this regard with the Executive Officer of Basel Headquarters in Switzerland.
He said they were attempting to send the garbage containers back to the country of origin.

To minimise damage to the environment, the CEA ordered that the containers be sealed once again with the contents. This Order the CEA said had been complied with.