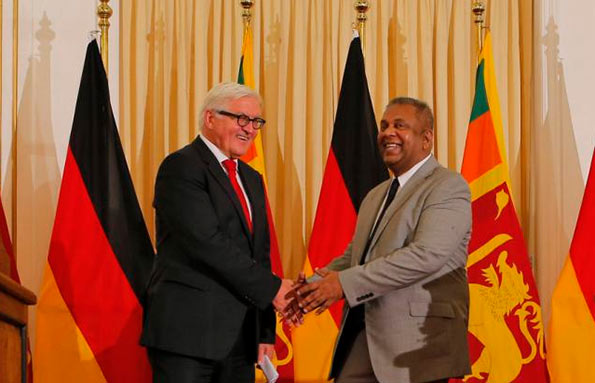 Steinmeier made the announcement after talks with his Sri Lankan counterpart, Mangala Samaraweera, in Colombo.

Last week, the United Nations human rights chief recommended that Sri Lanka set up a special hybrid court that would include foreign judges and investigators to examine the alleged atrocities, saying Sri Lanka’s own courts are not yet ready to carry out a fair judicial process.

Samaraweera said then that the country wants to conduct its own investigation but would accept some outside technical support. He said it would take about 18 months to create the needed institutions, including a truth and reconciliation commission.

Steinmeier said he and Samaraweera discussed the issue in their talks Tuesday.

He said the government will first hold consultations with political parties and civil society.

Sri Lanka’s civil war ended in 2009 with the government’s defeat of Tamil Tiger rebels who had sought to create a separate state for ethnic minority Tamils.

Meanwhile, former President Mahinda Rajapaksa, who led the military campaign against the rebels, urged his successor to reject the U.N. report.

He said any allegations should be investigated through the existing legal system instead of setting up special courts.