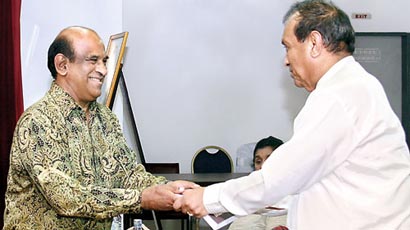 Mr. Jayasuriya made this point at a launch of late Mr. Senanayake’s biography titled “Dudley Senanayake the most loved leader of our time” by the Senanayake Foundation at the SLFI yesterday.

The UNP Deputy Leader said late Mr. Senanayake was able to form a government which comprised Tamils, Muslims and socialists including late Philip Gunawardane in 1965.

Mr. Jayasuriya also related the story of how Mr. Senanayake invited the Sri Lanka Freedom Socialist Party Leader C. P. De Silva to take over the premiership when the UNP came to power in 1965. He said this invitation was made as Mr. De Silva played a key role in bringing down the SLFP government in 1964.

He said the late Prime Minister was humble enough to seek people’s mandate to rule the country after he was made the Prime Minister through the back door. “He was also a man who tolerated criticism,” Mr. Jayasuriya said by recalling the famous poster ‘Dudleyge bade Masala Wade’ which was on the walls in the 1960s.

Well-known public servant Bradman Weerakoon who was the late Prime Minister’s secretary said his superior competed successfully with the others in Parliament with his oratory skills. “He competed with galaxy of orators including Bandaranaike with his remarkable felicity, Colvin R. De Silva with his resounding alternative sentences full of sound and fury, NM Perera with his highly polished analytical skills, “ he said pointing out that Dudley was equal to them with his words, wit and repartee.

He said the late Prime Minister had the ability to feel deeply and inclusively about the others who were not connected to him by race, religion, and caste. “By learning from the farmer he combined his science tripos from Cambridge,” he added.

Former public servant Amara Hewa Maduma who took a swipe on the present situation in the UNP and the state of the politicos as a whole said today’s leaders should commit suicide by Folidol as their discipline and moral values have declined to such a low level. Mr. Hewa Madduma made this point by comparing today’s politicians with Dudley.

He said one should not read the biography and keep quiet but should practise the policies of the late Prime Ministers.

Sri Lanka Freedom Socialist Party was a political party in Sri Lanka. SLFSP was formed in 1964 by C.P. de Silva when he broke away from the Sri Lanka Freedom Party. In the 1965 elections, SLFSP contested in coalition with the United National Party. In total SLFSP had 32 candidates, who received a total of 130’ 429 votes (3.2% of the nationwide vote). Five MPs were elected from the party. SLFSP joined the coalition government led by UNP.