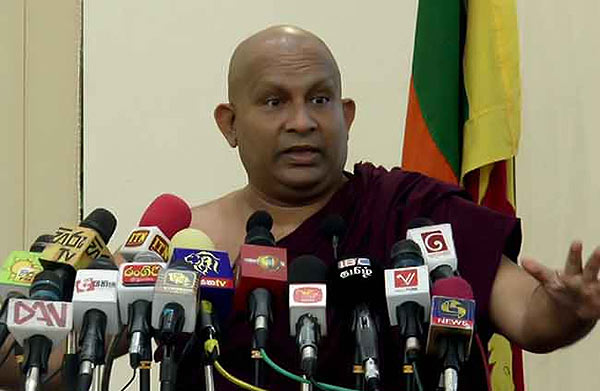 Addressing the media at NMSJ (National Movement for Social Justice) head office at Rajagiriya, on behalf of the Civil Society and their Trade Unions’ Collective, Ven Amila, Prof. Thenuwara and Ratnapriya emphasized that the Elpitiya result didn’t reflect the situation in the country.

They said that the mood of the Elpitiya voter couldn’t be compared with the electorate at the Nov 16, 2019 presidential election.

Having comfortably won all 17 polling divisions in Elpitiya, the SLPP secured 17 seats whereas the SLFP led UPFA, the UNP and the JVP won 3, 7 and 2 places, respectively.The civil society grouping stressed that even if the votes polled by the SLPP and the UPFA were taken together, the Elpitiya result didn’t pose a challenge to UNP Deputy Leader Sajith Premadasa contesting on the New Democratic Front (NDF) ticket under swan symbol.

Ratnapriya, however, assured that remedial measures would be taken having taken into consideration shortcomings, if any at Elpitiya. Ratnapriya said adding that if Friday’s Pradeshiya Sabha election took place in an area favourable to the UNP, the result would have been different. Ratnapriya cited Colombo Central as an example.

Declaring that the country was at a crossroads, they declared Sajith Premadasa was the best person to lead the country for the next five years.

At the onset of the briefing, the grouping described the presidential poll as a battle between Sajith Premadasa and wartime Defence Secretary Gotabaya Rajapaksa. Declaring a victory for Sajith Premadasa would be necessary to continue with political reforms initiated following the last presidential poll, the speakers warned of dire consequences in case Gotabaya Rajapaksa won.

The Island sought an explanation as to why Prof. Sisira Pinnawela formerly of the Peradeniya University at a recent press conference given at the same venue where Civil Society and Trade Unions’ Collective speakers were addressing the media now claimed that Speaker Karu Jayasuriya was far ahead of both Gotabaya Rajapaksa and Sajith Premadasa. The Island asked Ven. Amila, whether they believed Speaker Jayasuriya would have been the best to face Gotabaya Rajapaksa, the Ven thera said that the South Asia could be placed under Speaker Jayasuriya. Recalling the role played by Speaker Jayasuriya in Oct/Nov last year in the wake of constitutional coup perpetrated by President Maithripala Sirisena, the civil society grouping intervened to have the best person picked as their candidate.

Ven. Amila, having advised The Island to seek an explanation from Prof. Pinnawela explained the difficulties experienced by the UNP in picking a candidate. The Ven thera identified UNP leader Ranil Wickremesinghe as another person who had been in the presidential fray.

The thera explained how Sajith Premadasa qualified by his sterling performance both in and outside parliament.

Having lambasted Gotabaya Rajapaksa for excesses during the Rajapaksa administration, the civil society grouping welcomed Sajith Premadasa’s declaration that war winning Army Chief Field Marshal Sarath Fonseka would be named the next defence minister. There couldn’t have been a better choice than Field Marshal Fonseka to guarantee security of the nation.

Prof. Thenuwara, while accusing a section of the electronic media of misinterpreting a statement he made at the New Town Hall in the presence of UNP leader Ranil Wickremesinghe and NDF presidential candidate Sajith Premadasa on Oct 09, urged the electorate to defeat Gotabaya Rajapaksa. The then Defence Secretary acted as if he was the Vice President, Prof. Thenuwara said, urging the voters to help send Gotabaya Rajapaksa back to the United States.

Prof. Thenuwara said that that the decision on Field Marshal Fonseka was really a good one.

Ven. Amila faulted Gotabaya Rajapaksa for declaring at his inaugural campaign rally at the Salgado grounds, Anuradhapura on Oct 09, his intention to free those security forces suspects held in custody in connection with various cases. Emphasizing that only a handful of persons were in custody for carrying out illegal orders given by the Rajapaksas, Ven. Amila claimed that the yahapalana administration never harassed those who fought in the front.

Civil society speakers said that those who had carried out illegal orders would have to face the consequences even if they fought the LTTE.

Ven. Amila challenged the judiciary to take up Gotabaya Rajapaksa’s vow to release suspects while seeking an explanation from the SLPP candidate as to the number of officers and men in custody and relevant cases.

The media was told as to how the Rajapaksas sought to retain power even after their defeat at the 2015 presidential poll. The civil society praised the military top brass for not giving into political dictates as Maithripala Sirisena was heading for victory.

Recalling the circumstances under which the Rajapaksas transformed the parliament into a Kangaroo court to sack the then Chief Justice Shirani Bandaranayake in January 2013, the civil society said that the Rajapaksas routinely intervened with the judiciary.

Ven. Amila revealed that the civil society had finalized a comprehensive social contract with Sajith Premadasa covering all sectors.