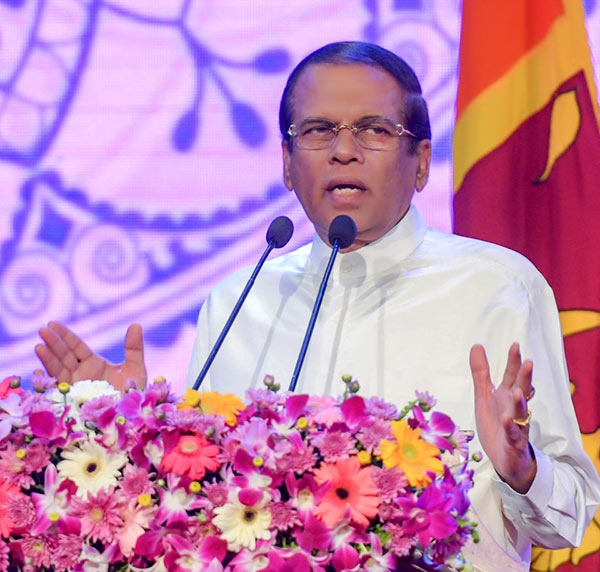 President Maithripala Sirisena yesterday said that while the opening of the Lotus Tower was a positive development for Sri Lanka there were governance concerns attached to the project as an estimated Rs. 2 billion loss was incurred to the Government due to an advance payment for the venture in 2012.

The Colombo Lotus Tower, the tallest in South Asia, was declared opened to the public yesterday by President Maithripala Sirisena and Speaker Karu Jayasuriya. Speaking at the event President Sirisena said the Government had to incur a Rs. 2 billion loss, which could otherwise have been used for welfare purposes as the payment was made to a company that was later found by authorities to be untraceable.

The contract to build the tower was awarded in 2012 to China National Electronics Importers & Exporters Corporation (CEIEC) and Aerospace Long March International Trade Co. Ltd. (ALIT) by the Cabinet of Ministers.

He noted the Sri Lankan Government had subsequently informed the Chinese Government through the Chinese Embassy in Colombo. The President said he had gone so far as to instruct the former Sri Lankan Ambassador to China to visit the address the company provided when the agreement was signed in 2012.

“Former Ambassador to China Karunasena Kodituwakku visited the address the company mentioned in the agreement. But the Ambassador was unable to find such a company at that address. That company disappeared with Rs. 2 billion.”

President Sirisena pointed out that following the disappearance of the third party of the agreement the Chinese Exim Bank did not release the balance of the loan.

“Total cost of the project was Rs. 16 billion as per the agreement made with the Chinese Exim Bank, which was supposed to provide the total amount but following the disappearance of the company, the bank only released Rs. 12 billion.”

President Sirisena claimed the project was only partially completed and Rs. 3 billion will be needed to complete the rest of the project. According to the President, the Rs. 3 billion could have been spent on welfare projects such as public healthcare.

The President also pointed out the Government will have to pay Rs. 2.4 billion annually as debt repayment for the project for the next 10 years.

Referring to the technical advancement of the project, the President said the tower will be the next chapter of the country’s telecommunication sector. He noted the tower would attract more tourists to the country. “Construction of the Colombo Lotus Tower can be seen as project that has moved Sri Lanka forward technologically,” he said.

Responding to the President’s speech, Mass Media Ministry former Secretary Dr. Charitha Herath in a Twitter message denied the President’s statements. “I just saw Prez @MaithripalaS speech at the opening ceremony of the Nelum Kuluna tower. As far as I know about this development project, many untruthful facts were mentioned in that speech. I guess TRC officials would rectify those misinformation. #SriLanka,” he said in the Twitter message.

The 350 m tall Lotus Tower was constructed at a cost of $ 104.3 million with funding from the Government of China. The Lotus Tower will function as a TV tower, a hotel, a shopping mall and a conference centre.