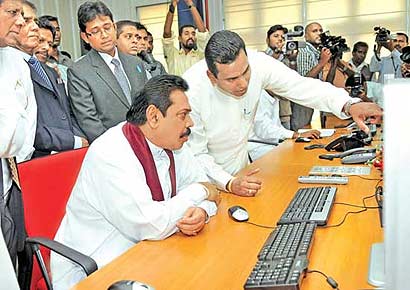 President Mahinda Rajapaksa speaking at the opening of the multi fuel combined cycle power plant at Kerawalapitiya yesterday said that the Government will focus on how the consumers are to be relieved from the burden of higher electricity bills soon.

The Government focused on alternative energy sources to generate electricity with the escalation of oil prices in the world market. The Kerawalapitiya Power plant second stage generates 100 MWs of electricity using furnace oil, he said. The President said the consumers should receive the benefits when electricity production in the country increases.

He said it is incumbent on any Government in power to face the power crisis faced by the country. “Electricity is a main factor in the development of a country and power generation should necessarily be increased if we expect to achieve the economic development,” he said.

The highest percentage of national expenditure goes towards purchasing fuel to operate these diesel power plants, he said.

When a country attempts to rebuild itself based on indigenous thinking and vision, certain elements look at this with a sense of skepticism and attempt to pull the leg when a country is trying to stand on its own feet, President Mahinda Rajapaksa said.

He stressed that he will leave no room for such forces to distract him from his duty of protecting and rebuilding the nation.

He said the Government has placed enormous faith in the potential of local experts . He added that the Keawalapitiya power plant is a clear sign of Government’s trust in its own professionals.

The President said that he is proud of the country’s engineers who went beneath the sea to erect concrete pillars on which the power plant stands.

The President said two thirds of the country was betrayed to the LTTE terrorists through an illegal agreement and the people had been deprived of their freedom at the time he came into power in 2005. He said the Government ended an era in which key Government institutions such as Airlanka and Sri Lanka Insurance Corporation were exploited under the guise of privatization. The professionals started leaving the country and farmers had no trust in the Agro based economy.

President Rajapaksa said he initiated a mechanism to free the country from all types of woes with an attitudinal change in 2005. The country has seen tremendous infrastructure development since 2005. A number of mega bridges ports, Airports are being constructed . He said the people are the real beneficiaries of these projects.