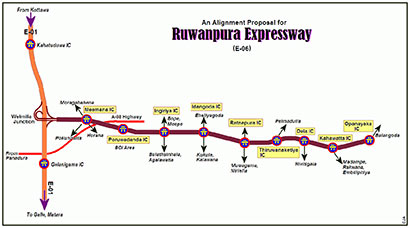 The government is planning to construct Ruwanpura Expressway also known as the Ratnapura Expressway which will be Sri Lanka’s sixth E Class highway. The 71.8 km (44.6 mi) long highway will link the Kahathuduwa exit on the Southern Expressway with Pelmadulla, a major city in Sabaragamuwa Province, Sri Lanka, via Ratnapura, the provincial capital of Sabargamuwa Province (on the third kilometer of Pelmadulla – Embilipitiya – Nonagama Road).

It is proposed to construct interchanges at Horana, Ingiriya, Kiriella, Ratnapura (Kuruwita) and Thiruwanaketiya. Around 7.2 km length of this Expressway is expected to be constructed via-duct.