Government to release 1,000 acres of lands in North 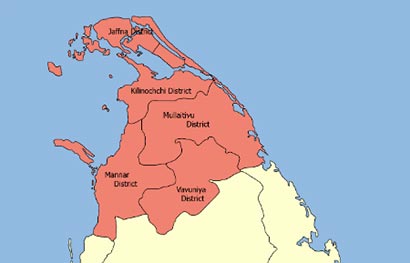 The government has decided to release lands extending to 1,000 acres in the Northern high security zones (HSZs) in several stages to civilians.

The Cabinet of Ministers has approved the proposal presented by President Maithripala Sirisena as the Minister of Defense.

As a first step 220 acres of land in the Valalai Grama Niladhari Division of the Valikamam East Divisional Secretariat Division is to be released to establish a pilot village for the resettlement of 1,022 families displaced by the War. Each family will get 20 perches of land and financial assistance to construct a house.

It has also been proposed to establish a school, a pre-school, a hospital, religious places of worship, community centers and build other infrastructure activities.

The remaining 780 acres of land will also be used in the future to resettle the people displaced by the war.

While a large extent of land from the 11,639 acres were under the control of the security forces during the period of the war, 6,152 acres in the Palaly area is being maintained by the Sri Lanka Army and the Sri Lanka Air Force as an HSZ.

Cabinet has also decided to release the lands under the control of the Sri Lanka Air Force in the Panama area in the Eastern Province to landless people in the area except the land in an extent of 25 acres in which buildings are now being constructed.

Home » Government to release 1,000 acres of lands in North