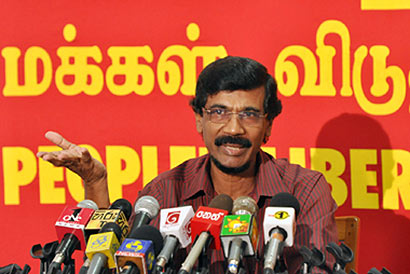 The Janatha Vimukthi Peramuna (JVP) said today the Government was solely responsible for the adoption of the UNHRC resolution because the Government was unable to win the confidence of the 12 countries that abstained because of human right violations and the inability to uphold democracy in the country after the war.

“The Government did nothing to secure the support of the member countries. Even countries like Indonesia and Kuwait which voted in favour of Sri Lanka last time abstained from voting this time. It was not so much about alleged war crimes but also because of media suppression, human right violations and been unable to establish democracy after the war. If the resolution was only about the alleged war crimes, the Government would have won,”JVP General Secretary Tilvin Silva said.

He accused the Government was attempting to gain political advantage out of the Geneva issue rather than trying to defeat it and said it did not have a proper vision or an action plan to defeat the resolution. (Daily Mirror)