If UK can appoint a British Military officer to be Governor of Australia why can’t Sri Lanka appoint a military Governor? 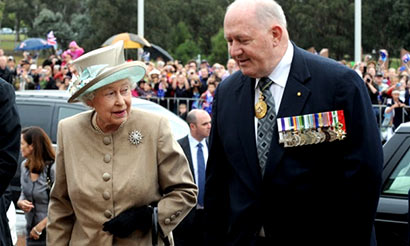 The Queen of England, Queen Elizabeth 2 has made her choice. She has picked General Peter Cosgrove as the Governor General of Australia. Peter Cosgrove is incidentally a former defence forces chief. Though the appointment was officially endorsed by the Queen the appointment in fact was made by David Cameron’s Conservative Party. Was it not David Cameron who found it unpalatable that Sri Lanka had chosen a military officer to be the Governor of Sri Lanka’s Northern Province and continues to send diatribe from the UK that military personnel should not be Sri Lanka’s Governor? Our question is if it is ok for UK to appoint a military Governor why can’t Sri Lanka. The only interpretation we can take from this is nothing other than racism where UK feels it is ok for them to appoint a military official but Sri Lanka cannot.

Unlike Sri Lanka which is a sovereign nation, Australia is a constitutional monarchy with the Queen as Sovereign.

The appointment of a Governor General for Australia by the UK is a customary one. In this instance the UK has appointed a retired general who was Australia’s defence  chief in 2005 and commanded the International Peace Keeping force in East Timor and had also been a platoon commander in Vietnam.

Maj. Gen. Chandrasiri was appointed as Governor Northern Province in 2010 by the Government of Sri Lanka. There is no person who knows the terrain of North Sri Lanka than General Chandrasiri and if the Queen can describe Cosgrove as one who had ‘dedicated his life to serving and supporting the Australian community’ why can’t Sri Lanka say the same thing about General Chandrasiri. If Tony Abbot can declare that Cosgrove ‘throughout his life he has demonstrated a commitment to our country and a commitment to service. He has given service of the very highest order to our country’ why is it unpalatable when Sri Lanka praises General Chandrasiri with similar sentiments?

The racism shown against General Chandrasiri by UK and the West is totally uncalled for. Such type of racist sentiments need to stop. It is totally unfair and uncalled for and the public of Sri Lanka denounces the manner in which there is a surge in racism by Western governments of late and shows that the West needs to realize that we no longer live in colonial times when nations can be treated as slaves and they as slave masters.

There is a growing necessity to link the behavior of Western nations with an inclination to view the rest of the world on racist terms no different to how they treated nations not so long ago and we are wondering whether the current spate of incursions followed by illegal occupation of sovereign lands is aligned to a larger plan to recreate the colonial agenda. If so, nations of the Third World need to now close ranks.

As for General Chandrasiri, the Governor of the Northern Province, it is upto the GOSL to ensure that no foreign government or NGOs & Human Rights Activists on payroll and sponsored by foreign nations can question or ridicule him. The public of Sri Lanka place a lot of faith in General Chandrasiri and regard him with respect.

What needs to be said is that if UK can appoint a General as Governor so can Sri Lanka.

4 Responses to If UK can appoint a British Military officer to be Governor of Australia why can’t Sri Lanka appoint a military Governor?

Home » If UK can appoint a British Military officer to be Governor of Australia why can’t Sri Lanka appoint a military Governor?