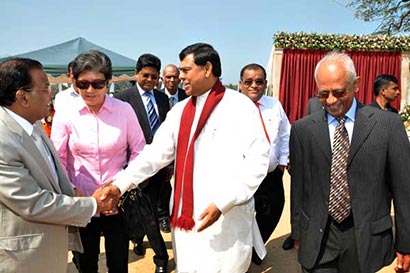 The government will never cut or prune free education and free health services in the country. The people sh ould not entertain any doubts or fears about it. The government will never lay its hands on these two welfare services as long as President Mahinda Rajapaksa remains in power, emphasised Economic Development Minister Basil Rajapaksa addressing a gathering after laying the foundation stone for the construction of the 350 metre high Lotus Tower at D R Wijewardene Mawatha, Colombo yesterday.

He said it is free education and free health services which enabled the country to make a phoenix like comeback in development and progress after undergoing an unfortunate situation for 30 years due to terrorism.

He said the President always steadfastly stood behind policies and visions enumerated by him and people should never fear that he or the government would ever waver or depart from them.

Minister Rajapaksa who recounted the massive development projects launched by the government over the years said transforming the country into a Wonder of Asia would be meaningless unless people were provided with a miraculous change in their living standards. The government led by President Mahinda Rajapaksa is always committed towards achieving these twin objectives, he said.