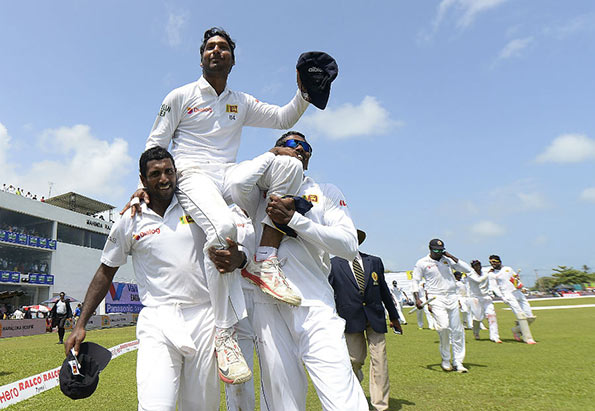 Sri Lanka will bid farewell to star batsman Kumar Sangakkara in the second Test against India that gets underway at the P. Sara Oval today.

Country’s most colourful and successful batsman – Sangakkara – wanted to end his career after the ICC Cricket World Cup, but on a request made by the then Chairman of Selectors Sanath Jayasuriya, extended his career by six months to feature in the series against Pakistan and India. His team mates will be keen to give Sanga a grand send off. It will be a nice gesture by skipper Angelo Mathews to let Sangakkara go out for the toss of the coin today morning.

Former captain Sanath Jayasuriya was impressed with Sangakkara’s commitment and hard work, he backed the young wicketkeeper batsman to the hilt when he broke into the scene in 2000. Soon Sangakkara cemented his place and within a couple of years became the team’s leading batsman and went onto compile more than 12,000 runs in Test cricket at an astonishing average of 58.

Sangakkara was elevated as Sri Lanka’s captain in 2009 June and during the stint that unfortunately lasted less than two years, he was sharp with team selections and placed a premium and demanded proper preparation for games.

Sangakkara took pride in performing well overseas. Under his captaincy, Sri Lanka won an ODI series in Australia for the first time in 2009 and reached the finals of World T-20 in England and World Cup in Bombay. Whenever the team won Test Matches overseas, Sangakkara contributed heavily like in Lahore 2002, Nottingham 2006, Wellington 2006, Guyana 2008, Durban 2011 and Headingley 2015.

Sri Lanka are 1-0 up in the series following their thrilling 63 run win in Galle. The return of fast bowler Dushmantha Chameera, who made his debut in the second Test against Pakistan, is sure to excite the Sri Lankans.

Chameera bowled with extreme pace in Pakistan’s first innings, but was unavailable for the rest of the series with a side stain. Nuwan Pradeep, who was also nursing a hamstring injury, will make way for Chameera.

India, meanwhile, are without the services of opener Shikhar Dhawan, who has been ruled out of the series with a fractured right hand. Murali Vijay, who missed the first Test due to a hamstring injury will return to the side.

India are playing only five specialist batsmen and their batting deficiencies were exposed during the opening Test in Galle. They are likely to bring in all-rounder Stuart Binny in place of off-spinner Harbhajan Singh.