Clarion call by incoming PM to all political parties: “Let’s work in unison” 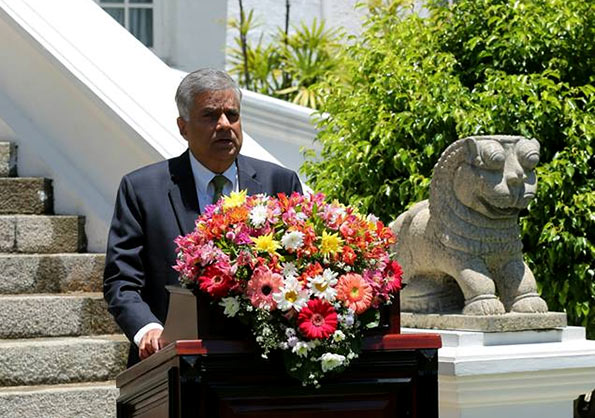 Prime Minister Ranil Wickremesinghe, yesterday invited all political parties representing Parliament to work hand in hand with the Government to arrive at a consensus on a national policy for Sri Lanka.

The Prime Minister extended this open invitation, while making a special statement at Temple Trees premises. He said he would take oaths as the new Prime Minister of Sri Lanka. His wife Maithri Wickremesinghe also took part in the occasion.

“We are taking forward the good governance policy with the President. We contested this election to carry forward a consensus building exercise,” he said.

The Premier also said: “We need to look at the problems of the people and obtain the support of all in Parliament to solve them. We will not divert ourselves from this task. We all need to go forward unitedly to accomplish this national exercise. There are two options to work out this plan. They can work either in the Government holding ministerial positions, or they can support us in Parliament by assuming responsibilities through the Oversight Committees,” he explained.

He said the approval of Parliament would be sought to carry forward the work plan of the Government.

“On August 17, the people of this country exercising their franchise elected a Parliament conforming to the January revolution and the good governance that we have started. I have discussed with President Maithripala Sirisena, the need to take this concept forward, where we all build the consensus on our national policy. This new approach, the Lichchavi approach as we call it, requires all parties to work together” he observed.

“I have also spoken with religious leaders. I want everyone to come together now. Let us discard the old fashioned politics. Let us try to work harmoniously at least for another two years to come to a consensus on the basic issues affecting the country. Think of the country, think of the people. I requested a mandate of the people for the action plan prepared by us. It will be presented to Parliament and a national policy framework will be prepared based on it with the consensus of all.

“We, together with the President and all party leaders, look forward to having a new era of politics and Government in this country. Let’s work this together. I don’t think anyone can opt out or can they go back to the divisive politics. We will not allow that” he added. He also observed that the country just concluded a very peaceful and law abiding Parliamentary Elections. “This should not be a temporary situation. It should last long. First let us work in unison to solve the people’s problems, and then we can restructure the system of party politics in this country. That is my aim” he commented.

Responding to a question by a journalist, the Prime Minister also noted that he expects to have closer relations with India by strengthening the mutual ties between the two countries.

1 Response to Clarion call by incoming PM to all political parties: “Let’s work in unison”