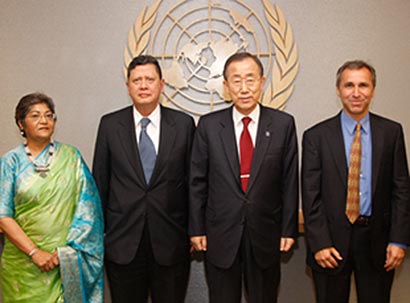 In the run-up to the Human Rights Council sessions in Geneva next month, those pushing for an international war crimes inquiry targeting Sri Lanka are stepping up pressure, with a key member of UNSG Ban Ki-moon’s Panel of Experts (PoE) on accountability in Sri Lanka, Prof. Steven Ratner reiterating the demand for an international investigation.

Last week, US national Ratner in his address to a gathering of diplomats and representatives of several NGOs, including Amnesty International and Human Rights Watch in Geneva, emphasized the need to go ahead with an international inquiry, regardless of Sri Lanka’s stiff resistance. The PoE comprised former Indonesian Attorney General Marzuki Darusman and South Africa’s, Yasmin Sooka.

External Ministry sources told The Island that the so-called round table discussion, ‘Delivering on the commitment to accountability,’ was nothing but an attempt to step up pressure on Sri Lanka ahead of the HRC sessions.

The relationship between accountability and reconciliation, too, had been discussed, which the organizers called an academic project on standard of proof in humanitarian and human rights fact-finding, with special focus on UN Inquiry Commissions.