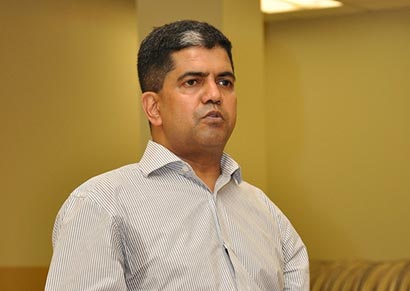 GTF spokesman Suren Surendiran said that implementation of positive recommendations made by the Lessons Learnt and Reconciliation Commission (LLRC) should be prioritized, while accountability issues addressed through an international investigative mechanism.

A true international effort, with the backing of key regional Governments, will bring real accountability for war crimes and reconciliation between communities in the island of Sri Lanka, Surendiran said. The Diaspora official told The Sunday Island on the sidelines of the United Nations Human Rights Council (UNHRC) sessions in Geneva that there wouldn’t be peace as long as the government ignored the genuine grievances of the Tamil speaking people.

The following is Surendiran’s statement: “The United Nations Human Rights Council which is in session in Geneva right now presents a great opportunity for the international community to address the issues of accountability, for the alleged war crimes and crimes against humanity, committed by both sides during the final stages of the war in Sri Lanka.

Global Tamil Forum (GTF) welcomes the positive recommendations proposed by the Lessons Learnt and Reconciliation Commission (LLRC) as practical first steps to creating the environment conducive to reconciliation and asserts that these need to be expeditiously implemented. However, it is almost three years since the end of the war and the Sri Lankan government has demonstrated no commitment to credibly investigate allegations of war crimes, breaches of international humanitarian law and to bring the perpetrators to justice. The failure of domestic efforts to adequately address accountability has given rise to the continuing culture of impunity and grave human rights abuses.

Even the LLRC observed that its own interim recommendations which were issued in September 2010, such as publishing a list of detainees and disarming paramilitary groups, have not been implemented. This consistent record of non-implementation by the government, and its refusal to take steps towards creating a social and political environment of positive peace and justice remains the most serious problem for the Tamil people in Sri Lanka.

GTF firmly believes that only an international, independent investigation can secure truth and accountability for what happened during the war and calls upon the international community to take a principled stand, to ensure that the positive LLRC recommendations are implemented in a timely manner and accountability is addressed through a credible international mechanism, as recommended by the UN Panel of Experts (PoE) in their report, in order to lay the foundations for meaningful reconciliation.

We will continue our work with international governments and non-governmental actors to bring just peace for all Tamil speaking people, all other communities in the island and justice for the victims of war. In this regard and various other matters affecting the Tamil people in Sri Lanka, senior members of GTF met with senior Foreign Ministry officials of Switzerland in Berne and UN Ambassadors for various African countries in Geneva this week, to discuss how a credible reconciliation process can be advanced between all communities in the island. GTF members will also be meeting other voting member country Ambassadors and senior Foreign Ministry officials in the coming days.

GTF has, and always will, support the efforts of the international community, with the backing of key regional governments, to pursue a binding commitment from Sri Lanka to seek international expertise and wider international participation to resolve the genuine grievances of the Tamil people, that underpinned decades of conflict, through a durable political solution.”