Gunmen kill 43 in attack on Shiite minority in Pakistan 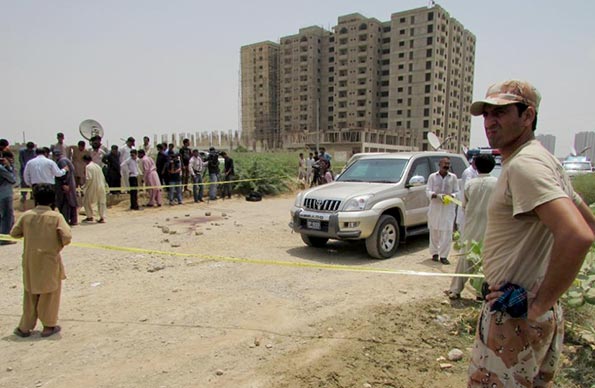 KARACHI, Pakistan — Gunmen killed more than 40 people on Wednesday aboard a bus in southern Pakistan bound for a Shiite community center, in the latest attack targeting the religious minority.

The attack in the port city of Karachi was the deadliest Pakistan has seen in months. Provincial police chief Ghulam Haider Jamali said 43 people were killed, including 16 women, and another 13 people were wounded.

The bus was in a relatively deserted area on the outskirts of the city en route to a community center for Ismaili Shiite Muslims when six gunmen boarded it and opened fire, Jamali said. The attackers then fled on three motorcycles.

Qadir Baluch, a security guard at a nearby building, said he heard the gunshots and saw the militants driving away. He said one of them was wearing a police uniform.

Local TV showed the bus riddled with bullets and panicked relatives crying at the scene or waiting at the hospital.

A splinter faction of the Pakistani Taliban called Jundullah, or Army of God, claimed responsibility for the attack. A man purporting to be a spokesman for the group called The Associated Press from an undisclosed location and said “infidels were the target.” The purported spokesman, Ahmad Marwat, has conveyed similar claims in the past.

The Taliban and other Sunni militant groups have long had a presence in Karachi. Sunni extremists view Shiites as apostates and have targeted them in the past, though attacks on the Ismaili branch have been rare. Qasim Shah, an Ismaili community member, said the bus service had been operating for the last 10 years.

“They were innocent people,” said Qaim Ali Shah, the chief minister of Sindh province, of which Karachi is the capital. “We feel very sorry for this ghastly act.”

Wednesday’s attack was the deadliest in Pakistan since December, when Taliban militants killed 150 people, mostly young students, at an army-run school in Peshawar.

The Pakistani Taliban have been fighting for more than a decade to overthrow the government and impose a harsh version of Islamic law. Their attacks have killed tens of thousands of people.

Pakistan launched a major military operation nearly a year ago in the North Waziristan tribal region along the Afghan border, where the Taliban and other militant groups had long found safe haven.

Pakistani army chief Gen. Raheel Sharif cancelled a three-day visit to Sri Lanka after Wednesday’s attack. He and Prime Minister Nawaz Sharif visited Kabul on Tuesday, where they pledged to work with the Afghan government to fight militants.

The prime minister condemned the bus attack, calling it “an attempt to create chaos.”

“Terrorists have chosen a very peaceful and patriotic community to target in order to achieve their nefarious designs,” he said.

Home » Gunmen kill 43 in attack on Shiite minority in Pakistan