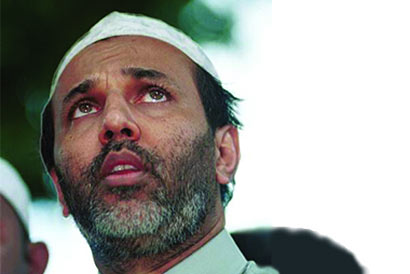 The Sri Lanka Muslim Congress (SLMC) Leader and Minister of Justice Ruaff Hakeem who had expressed his displeasure over the attacks on Muslim business establishments in Pepiliyana on Thursday had requested President Mahinda Rajapaksa to convene a special Cabinet meeting to discuss the rising religious unrest in the country.

SLMC sources told Daily Mirror that Mr. Hakeem had made this request over the phone last morning.

Both have discussed the situation at length where the President had assured to take action to defuse the growing ethnic and religious tensions.
Minister Hakeem has also contacted all the Muslim Parliamentarians including Senior Minister M. H. M. Fowzie (who is currently out of the country) and Ministers Rishad Badiutheen and A. L. M. Athaullah with regard to the current situation.

A statement issued by the SLMC said the Mr. Hakeem was convinced that the Pepiliyana incident was not an isolated one.

“Therefore he had expressed his dismay at the ineffective response of the law and order machinery of in containing the spread of such violence and unrest that fuels insecurity and peace of all minority communities in Sri Lanka,” the statement said.

The statement said the 30-year civil unrest, violence and bloodshed confined to the war front of the North and East was over.

“What we are now witnessing is unrest and violence extended to the rest of the country too, threatening post war religious freedom with the potential to lead our multi ethno-religious communities to irreversible depths of antagonism once again,” the SLMC statement said quoting its leader.

The statement added that President and his powerful good office that contained violence and bloodshed of the past, he believes can and will spend no time in curbing such violence too, by nipping it in the bud.

The minister had also stressed that the duty and responsibility for the protection of people must be borne by the government and the State apparatuses of the country alone.

“No religious extremist/militant element can take the law onto them nor should they provoke others. In this light, the Minister appeals to His Excellency the President and the most revered Buddhist high prelates to take proactive action to stop this spread of religious attacks and intolerance,” the SLMC statement added.