Half a million people affected by floods in Sri Lanka 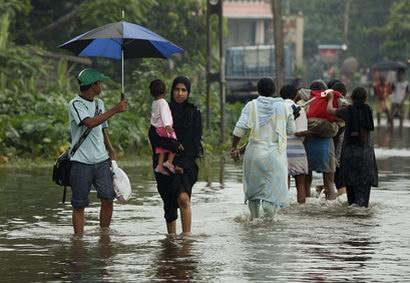 Floods caused by heavy rain in several areas of Sri Lanka have affected more than half a million people, and taken at least 20 lives. Torrential pre-monsoon rains were worsened by cyclone Laila, which formed in the Bay of Bengal.

The worst-hit districts are Colombo, Kalutara and Gampaha in the west. Many other areas in the south, northwest, east, north-central and inland are also inundated. According to the disaster management ministry, nearly 180,000 people in Gampaha, 140,000 in Colombo and 91,000 in Kalutara are affected.

On Thursday, government officials declared an emergency situation in the Nuwara Eliya district of the central hills. Tea plantations and poor workers there face the threat of landslides.

Although cyclone Laila is moving away from the island, strong windy conditions will continue, leading to showers in the Western, Central, Sabaragamuwa and Southern Provinces, according to the Meteorological Department. Bus and train transport remains severely curtailed because of flooding.

Many parts of Colombo have been flooded, disturbing normal activities. Those most affected are poor shanty dwellers living in low-lying areas, on canal banks and along the Kelani River. More than half the capital’s population live in shanties—many are street hawkers or do odd jobs. In the Kalutara district, south of Colombo, farmers and workers in small plantations have been badly hit. Flood waters have cut off some villages.

The government media reported that President Mahinda Rajapakse held an emergency meeting on Tuesday to discuss the floods, but allocated just 80 million rupees ($US700,000) for the hundreds of thousands of victims.

Disaster Management Minister A.H.M. Fowzie was forced to acknowledge the inadequacy of the allocation. Saying that he was forwarding a cabinet proposal to increase the meal allowance of 30 rupees per person, he added: “I want to double the amount. It is shameful to give 30 rupees for a meal when I know the present price of food.”

Rajapakse has ordered the authorities to remove the people living along canal banks in Colombo and its suburbs, and to “take prompt action against the unauthorised constructions that led to this situation”.

While these orders were presented as a sympathetic effort to assist flood-affected families, there is suspicion that the government is using the emergency to clear shanties as part of a plan to develop Colombo as a commercial hub. On May 7, the government began to remove poor families from the city when soldiers and police demolished houses at Slave Island in central Colombo.

To divert attention from its own responsibility for the massive toll taken by the floods, the government has started blame-shifting. Minister Fowzie accused the Colombo municipal authority of failing to clear drains and culverts. He also declared that residents were responsible for dumping polythene and refuse in canals, blocking them.

The floods are a result of a natural disaster. However, the responsibility for the severe consequences, particularly for poor people, lies directly with the government. Successive governments have promised housing, sanitary facilities and infrastructure but nothing has happened. At the same time, billions of rupees have been spent on the security forces, first to pursue the war against the Liberation Tigers of Tamil Eelam (LTTE), and now to enforce the government’s pro-business and austerity measures.

On Thursday, WSWS correspondents visited flood victims in Kotikawatta-Mulleriyawa, on the outskirts of Colombo. Nearly 300 people have taken refuge in a local school, while 630 families are still living in flooded houses.

They blamed the authorities for their plight. A mechanism to pump excess water from the area to the Kelani River had been abandoned after only one year. Residents had also demanded houses elsewhere but to no avail. The government had ignored several protests against the dumping of garbage by a private company, which had contributed to floods.

At the school, men sleep on the floor while women and children sleep on school desks. Most are ill, suffering from fever and cold. Sanitation facilities are poor, threatening the spread of disease. Seventy families share two toilets. There is not enough clean drinking water, and the school roof is leaking.

None of the affected families had permanent jobs. Some were street hawkers; others did odd jobs. Their now-flooded housing also lacked basic facilities—most houses had no toilets. People generally blamed governments and politicians for not solving these basic problems, despite repeated requests. The most common comment was: “Politicians have done nothing. They only visit us in election periods and provide some roof sheets.”

Santhi, 35, described her experience. Her husband was a street hawker at Pettah in central Colombo for nine years, until the government removed street sellers from that area. They have three children, two of whom are going to school. “After losing his job [in Pettah] he tried to do street hawking in Grand Pass [another area in Colombo]. But the police arrested him and kept him for one day. So I started selling plastic goods and incense sticks, going house to house. Now, due to this flood situation, we have lost that income, and we have no way of sending the children to school. No government has cared for us. We have no confidence on any of them.”

Maneesha, 33, said: “My husband did daily odd jobs. We have two children going to school. He has no income due to the floods, and the children are ill because of the floods. We have demanded that every government make our lands higher to prevent floods or provide alternative land. We have been suffering for the past 20 years.”

A further 125 people who lived on the banks of the Kelani River had been staying at another school in the area for five days. During that time, they had received only three meals from the government, forcing them to depend on the supplies from the Red Cross and neighbours. There is only one toilet, which they must share with the school’s students.

Selvaraj, a three-wheeler driver, said: “I can’t do my job due to this situation. I earn only 500-600 rupees per day. Six of us had to live on that. Although the government promised relief after the war, we have had none. Again they are going to increase fuel prices, so our current income will decline further.”

Rani said her family of six depended on her husband to do odd jobs. “Now we lost even that limited income. Although the government claims in the media to be giving us relief, we have received no such relief. In our homes, we had no facilities and not enough room. There was nowhere for children to play. We also suffer from diseases due to the dumping of garbage in the area. We have not been given deeds for our houses, despite our requests. We are considered unauthorised settlers.”

Home » Half a million people affected by floods in Sri Lanka