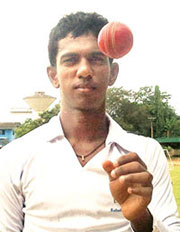 Left-arm paceman Harsha Rajapaksha of Rahula College, Matara has taken all ten wickets in an innings, in a spell of ten overs, to restrict Devapathiraja College, Ratgama to a paltry 23 runs on day one of their Under-19 cricket encounter at Uyanwatta Stadium, Matara yesterday.

Rajapaksha has given away just eight runs in his 9.3 overs which also included four maidens, according to his school officials who confirmed the notable feat.

In a telephone interview, Rajapaksha told The Island that his opponents were beaten by the swing and Yorkers of his.

“They were beaten by out-swingers and when they left the ball, it got them bowled. I also used Yorkers to good effect. I am really pleased with my performance,” said Rajapaksha whose previous best feat had been couple of five-wicket hauls.