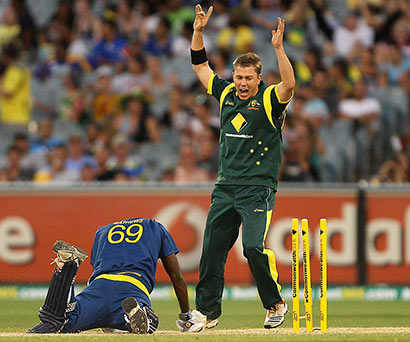 The national cricket team’s support staff currently consists of eight individuals and to that long list they may as well add a running between the wickets coach, a discipline where the Sri Lankans have been awful this summer here in Australia. The trend continued in yesterday’s first ODI against Australia as Sri Lanka suffered a hat-trick of run outs, two of them in successive balls to suffer a 107 run defeat here at the MCG to concede an early lead in the five match series against what effectively is Australia’s ‘B’ team.

The hosts have left out Michael Clarke, Mathew Wade, Shane Watson and David Warner among others for the first two games and Sri Lanka had a wonderful opportunity to take an early lead, but their horrendous tour continued and after being in Australia for five weeks, they are yet to record their first win in this country.

It was at the MCG Sri Lanka were thrashed by an innings an 201 runs inside three days in the Boxing Day Test, but they had won their last three ODIs here and with 28,000 spectators, most of them Sri Lankan fans, firmly behind them they had everything going for them.

Australia were set up by Philip Hughes, who become the first Australian to score a century on debut. Chasing a target of 306 runs, the tourists lost Upul Tharanga (1) and Mahela Jayawardene (5) cheaply, but a 94 run stand between Tillekeratne Dilshan and Dinesh Chandimal kept them interested before a succession of run outs.

Sri Lanka were progressing nicely at 111 for two at half way mark, but the run outs saw them slipping to 128 for five and with that the game too went away from them.

Dilshan pushed one to mid-off and set off for a single, but was run out by a direct hit by Usman Khawaja while Angelo Mathews fell for another direct hit, this time by Glen Maxwell, when he backed up too far at the non-striker’s end. Lahiru Thirimanne was dismissed the next ball again by a smart work of fielding from Maxwell.

Chandimal was fighting a lone battle and he fell for 73 after Brad Haddin took a terrific diving catch. Sri Lanka were bowled out for 198 with ten overs to spare

It was the third wicket partnership worth 140 runs between captain George Bailey and Hughes that kept Australia going. Hughes became the eight batsman in the world to compile a hundred on debut and the third against Sri Lanka. He made 112 off 129 deliveries with 14 fours.

Lasith Malinga fresh from his Big Bash League exploits where he finished as the highest wicket taker and most economical bowler went for 61 runs in his ten overs and managed just one wicket.