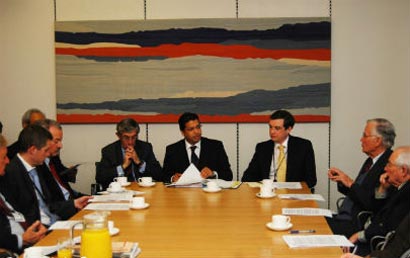 Dr. Chris Nonis articulated that the holistic approach of the LLRC is entirely consistent with restorative justice embedded with accountability. He further stated that it is a comprehensive, objective and impartial report which demonstrates the integrity of the LLRC, and it is set in the context of International Humanitarian Law incorporating the principle of distinction and principle of proportionality. He said that it has a wealth of content and provides a nuanced understanding of the conflict, and many lessons can be learnt from it. He further stated that the release of the LLRC Report in full by the Government of President Mahinda Rajapaksa demonstrates both its sincerity and commitment and is a landmark in the reconciliation process of Sri Lanka in the post-conflict era.

Conservative MP James Wharton said “This is an extremely welcome opportunity to discuss the way forward for Sri Lanka after what has been a very difficult period of its history. The High Commissioner gave us a very thorough overview of the (LLRC) Report including answers to a wide range of questions. I know that a number of my Parliamentarian colleagues look forward with the intent to seeing Sri Lanka progress over the coming months and years”.

Lord Rogan of Lower Iveagh who was a key figure associated with the Northern Ireland Peace Process and the Good Friday Agreement said “As we know and have experience from coming out of a 40-year old conflict in Northern Ireland it takes time and patience to move from conflict to consensus politics and I would ask all peoples in Sri Lanka and the Diaspora to have patience and give time and space for a peaceful solution to develop”.

Sir Harold Walker KCMG, President, British Society for Middle Eastern Studies and former Chairman, Royal Society for Asian Affairs said “It is commendable that the Sri Lankan Government released such a comprehensive and hard-hitting report; of course. the world will be watching to see that the report is followed through. However, so far, the signs are clear that the Government of Sri Lanka do intend to follow the Report through. They must however be allowed time for this process, in particular since it follows such a long period of conflict, and these issues cannot be settled overnight”.

Deputy Secretary General of the Muslim Council of Britain, Mr. Shuja Shafi said “I am pleased to listen first hand, to the recommendations in the LLRC Report, and will be happy to work with the communities here to see how we can facilitate a dialogue with inputs from the communities in the UK”.

Mr. Khalid Nadeem, Chairman of South Asia and Middle East Forum said “Dialogue is the way forward, we need to put the conflict behind us, and reach out to each other to achieve a just and peace in Sri Lanka today. The Report provides a firm foundation for the way forward for all parties”.

President of the Friends of Sri Lanka, Sir Peter Heap said “This was a very valuable meeting, well attended by Members of Parliament and representatives from many other organizations.  The Sri Lankan High Commissioner gave a superb account of the Report of the LLRC and of the government’s response. It was a very useful reminder for everyone present that Sri Lanka was doing a great deal to bring together the different communities and to restore prosperity in the conflict-affected areas”.