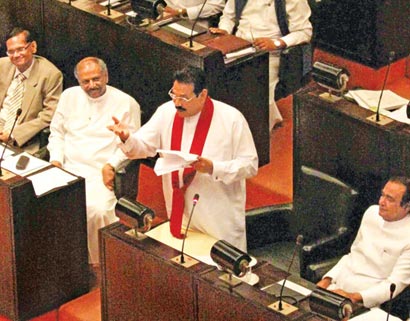 President Mahinda Rajapaksa yesterday stated that it was proved that the budget proposals for 2012 are development-oriented by the response of the people to them and the research conducted by various institutions on the budget’s impact.

The President made this observation in Parliament, joining the committee stage debate of the Appropriation Bill in relation to the finance heads of the Finance and Planning Ministry, in his capacity as the Finance and Planning Minister. President Rajapaksa also stated that research conducted by the Financial Times, which is a reputed magazine in the finance and economic field, has revealed that 64 percent of the people in the country maintained that this budget was people-friendly. He added that this was a positive response received by the budget as well as the government. He added that this was the first time in history that a budget was appreciated outside Parliament, parallel to the passage of the Appropriation Bill with a majority of 91 votes at the second reading.

President Mahinda Rajapaksa further stated that research conducted by the government on October 02, 2011, parallel to a consultation programme held to obtain views of the public to formulate the budget proposals, revealed that 68.7 percent of the people were content with the development projects implemented by the government.

President Mahinda Rajapaksa also stated that it was better for the Opposition to join in developing the nation’s economy rather than satisfying the international community.

He added that the attempt by the government to maintain the budget deficit at a rate of 6.2 percent of the national income is identified by the Opposition as neoliberalism and it was an attempt to look down on the ‘Mahinda Chintanaya’. He added that they attempted to confuse this budget with the neoliberalism may be because they happened to recall their unpleasant experience of attempting to sell a large number of public institutions, including CPC, Railways, Sri Lanka Customs, People’s Bank etc to fill the budget deficit during 2002-2004 under the ‘Regaining Sri Lanka’ programme.

He further added that the policy maintained by this government in preparing the budget was poles apart from the Opposition and this government has never attempted to bridge the budget gap by selling public institutions. He added that even the Embilipitiya paper factory that was assumed to be beyond rejuvenation was handed over to the private sector, keeping room for government to intervene.

The President also stated that a sum of Rs 500 billion has been allocated for development work in 2012 only, which is 44 percent of the expected inland revenue. He also added that 25,000 youth are to be recruited to the public service including 15,000 graduates.

President also added that hadn’t Jaffna Mayor Duraiyappa been assassinated we would have been a nation speaking of national unity and peace instead of one that speaks of terrorism.

He emphasized that this nation has to regain everything that it lost.

He added with this objective the government is concentrating on an investment oriented, export oriented economy while encouraging local production and international trade.

The Appropriation Bill 2012 (budget 2012) was passed with a majority of 98 votes in parliament yesterday.

The division was asked by Chief Opposition Whip John Amaratunga. President Mahidna Rajapaksa in his capacity as the Finance Minister presented the Appropriation Bill 2012 in Parliament on November 21. The second reading which lasted seven days was passed with a majority of 91 votes on November 30. The third reading of the Bill which commenced on December 1, continued until yesterday and the vote was taken up at around 5.30pm.