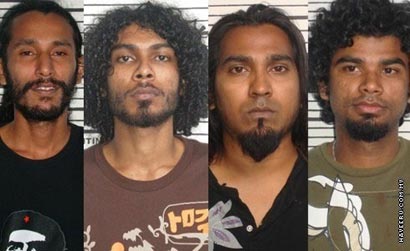 Maldivian Police have busted a major drug smuggling network involving Sri Lanka and the Maldives, Maldivian media reports. “From our investigations we found out that the drugs were airfreighted via an agent in Sri Lanka,” Police said.

Superintendent Mohamed Jinah told journalists this afternoon that Shafaz, suspected to be one of the most high profile drug lords in the country, was arrested from a rented apartment at the residence of Eydhafushi MP Ahmed ‘Red Wave’ Saleem under a special operation named Operation Challenge.

According to police intelligence information, the drug network had been functioning since 2005 with Shafaz as the head and assisted mainly by three; Hussein Athik of Maafannu Fehi Asseyri, Hussein Athif of Maafannu Kudhehige and Ismail Shameem of Karankaage/Thaa atoll Thimarafushi – all of whom arrested on Thursday evening.

The money goes into the hands of the dealer and drugs are imported into the Maldives.

“From our investigations we found out that the drugs were airfreighted via an agent in Sri Lanka,” Jinah said.

Police intelligence also recovered the receipt of a transfer Athik made via A.J.E Emporium, which police believe is related to the narcotics trade. Athik had been arrested twice on unspecified charges within the past four years.

Police said Rf1.3 million worth of transactions were made since February of this year.

Jinah stressed that A.J.E Emporium has agreed to fully corporate with the authorities and that the police are working with Sri Lankan authorities to uncover further details.

Shameem, who had been arrested five times over the last eight years on multiple charges, is believed by the police to have been behind the stocking, packing and distribution of the airfreighted drugs in Male and the atolls.

Athif, who had been arrested once during the past four years, is suspected of contacting the dealer in Sri Lanka and worked with the unidentified dealer to import the drugs into the country undetected.

Information has also been received that drugs collected in India, which goes into the hand of the network, is then imported via Sri Lanka to the Maldives.

Shafaz and accomplices were apprehended while packing drugs in apartments located on the ground floor and fifth floor of Henveiru Fashan. Police found equipment used for packing, gloves and many other apparatus linked with the trade.

On being warned by two watch outs placed by the network outside the house Shafaz tried to escape by fleeing to the second apartment, the police revealed.

Police confiscated 800 grams of heroin from Shafaz’s apartment and opiates from another apartment rented from another floor of the house by a person connected to the network.

A fourth accomplice, active in selling drugs was also arrested on February 15, 2010 along with drugs but was later released. Police tracked him as information was received that he was selling drugs imported by the main target, Shafaz.

The man was taken into custody again on Thursday evening during the raid.

Jinah noted that since the start of the operation police had been working closely with the Prosecutor General’s (PG) Office, taking into consideration the PG’s suggestions on how to legally pursue the matter. Police will be able to submit the case to the PG next July, he added.

“We have identified the pathways used by the group to import the drugs to the country. We have discussed this with the Prosecutor General and set up our proof in a conclusive manner ready to be presented at court,” he said.

Jinah expressed his confidence that the case would be successful unlike most other cases during trial, as police intelligence gathered circumstantial evidence since the beginning of the operation, Haveeru News Service reports.