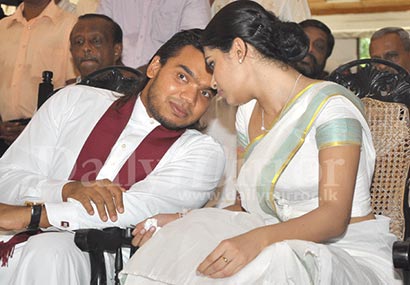 “My father didn’t do politics for money, and the people loved him for all the service that he rendered to the people. I want to continue the same politics that my father did and will do this from Kolonnawa” she said.

Hirunika made these remarks while addressing a ceremony to lay the foundation stone for the erection of a statue of her father in Kolonnawa. “When giving nominations in future, political parties should consider the moral character of the people who are given nominations. There is also a drug menace in the area and I want to spearhead the battle against it,” she said.

Leader of the House Nimal Siripala De Silva, speaking at the event invited Hirunika Premachandra to embark on a political career. “I invite Hirunika to continue the good work of her father, who did a lot for the party and the people of this area. She should follow in the footsteps of her father” he said.

Ministers A.H.M Fowzie and D.E.W Gunasekara and MPs Karu Jayasuriya, Namal Rajapaks and Thilanga Sumathipala and a host of other dignitaries participated in the event.