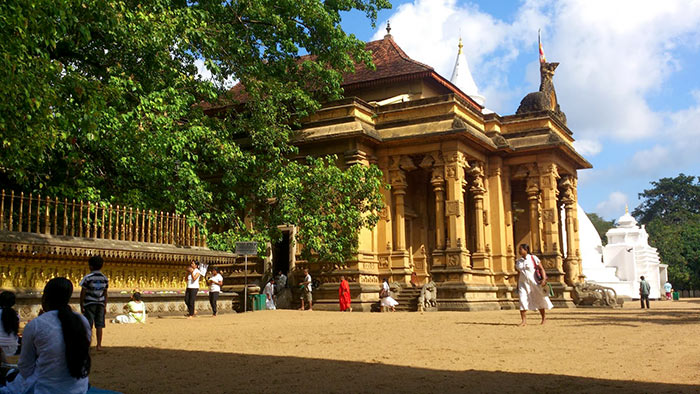 Parallel arrangements have been finalized by the Army with the cooperation of sister services, Police and Civil Security Department to commemorate all fallen War Heroes who laid their precious lives against LTTE terrorism in a fitting mega ‘Aaloka Pooja’ (lighting) ceremony at Kelaniya Raja Maha Viharaya on Saturday (19) evening to coincide with the main ceremony on National War Heroes’ Day (May 19) at Battaramulla.

The conduct of the ‘Aaloka Pooja’ that kindles 28,619 lamps, a move unprecedented in living memory, dedicated symbolically to each fallen tri service and Police War Hero and those went missing in action during the LTTE violence is held on a conceptual notion of the Commander of the Army, Lieutenant General Mahesh Senanayake with a view to transferring merits to supreme sacrifices and lauding their memories of gallantry and valour, sacrificed for defence of the motherland to create a better tomorrow for all in the island.

President Maithripala Sirisena, Chief of Defence Staff, Commanders of the Army, Navy and Air Force, Inspector General of Police and Director General, Civil Security Department and a representative gathering of next of kin of fallen War Heroes are expected to set light to those lamps at Kelaniya Raja Maha Viharaya before offer of Gilanpasa and religious observances, amid beating of Hewisi drums takes place after the President makes the traditional invitation to the monks.

Meanwhile, all country-wide Security Force Headquarters, Divisions, Forward Maintenance Areas, Brigades, Units, Army Training Schools, Logistic Command, Regimental Centres, Field Headquarters and War Hero Rehabilitation Centres on the directions of the Commander of the Army are scheduled to commemorate their fallen comrades concurrently at 9.30 a.m. at all those places on Friday (18). Flag-raising, Recital of the National Anthem and the Army song, Two-minute silence, Reading of the Commander’s War Heroes’ Day message, followed by a brief address to the troops by respective Heads of institutions are among highlights of those Army commemorative ceremonies.

The climax of National War Heroes’ Day commemorative arrangements is meanwhile scheduled to get underway on 19 May at Battaramulla War Heroes’ monument, headed by HE the President and with the participation of Hon. Prime Minister, Speaker, Governors, Ministers, Chief Ministers, Secretary Defence, Chief of Defence Staff, Commanders of the Army, Navy and Air Force, Inspector General of Police, Director General, Civil Security Department, RSA Chairperson, state officials and a representative gathering of relatives.

The floral-wreath laying ceremony at Battaramulla offers a deep reverence to the memory of unparalleled gallantry at the magnificent monument where all names of War Heroes who fought against the LTTE terrorism remain engraved as eternal memories.

Seconds after ceremonials, HE the President Maithripala Sirisena along with the Prime Minister, Speaker, Secretary Defence, Chief of Defence Staff, Army, Navy and Air Force Commanders and the IGP are expected to lay floral wreaths at the cenotaph and salute all War Heroes of our times. Next, with the sounding of the Last Post honouring their memory in military way would mark the culmination of the formal ceremony with trumpeters playing the Reveille at Battaramulla.

The same morning (19) unblemished and outstanding service of 50 Army, Navy and Air Force Senior Officers who now are considered war veterans is to be honoured by awarding the prestigious Vishishta Seva Vibhushanaya (VSV) Medal that recognizes their exceptional, distinguished and loyal dedication to the Nation with a record of moral and military conduct. The ceremony, is to be graced by the President Maithripala Sirisena at the President’s Secretariat as one more segment of the chain of memorial events. Among recipients of those VSV laurels are the Commander of the Army, Commander of the Navy and the Commander of the Air Force, in addition to 24 more Army, 22 Navy and 1 Air Force War Heroes, some of who are now in retirement.

In the meantime, Sri Lanka Army, together with the Ranaviru Seva Authority (RSA) joined island-wide state-patronized commemorative arrangements of fallen War Heroes at provincial levels in the past fortnight.

The inauguration of the commemorative month (May 2 – June 2) in early May after pinning the first Ranaviru flag on HE the President assumed greater significance when HE the President Maithripala Sirisena on Friday (11) as the Commander-in-Chief of the Armed Forces, unveiled the new state-of-the-art, ‘Wayamba Ranaviru Abhiman’ War Heroes’ Monument at Ethugalpura (Kurunegala), the district which had gone on record producing the most number of valiant War Heroes to the battlefield to fight against ruthless LTTE terrorism that plagued the country before 19 May 2009.

After the President saluted the memory of those heroes, Chief of Defence Staff, Admiral Ravindra C Wijegunaratne, Commander of the Army, Lieutenant General Mahesh Senanayake, Commander of the Navy, Vice Admiral Sirimewan Ranasinghe and representatives of the Navy and Police in succession followed suit at Kurunegala and placed floral wreaths. The new monument replaced the previous one which was temporarily moved out for road development work.

Prior to the ceremony at Kurunegala, a wreath-laying ceremony at the Jaffna-based Palaly War Hero memorial, headed by the Governor for Northern Province occurred, giving priority to religious observances of all four major denominations, (Buddhist, Hindu, Catholic and Islamic) faiths. A large gathering of tri-service officers, state officials and Mrs Anoma Fonseka, Chairperson, RVSA contributed to the day’s arrangement in Jaffna.

During those commemorative ceremonies, all of them, headed by respective Governors, the Army jointly with the RSA assisted arrangements and facilitated family members of fallen tri-service and Police War Heroes to those respective provincial commemorations to pay their solemn tribute to their beloved next of kin in close coordination with tri-service authorities.

This annual programme kicked off on Saturday (12) after the nuns were conducted in a procession to the Sri Bodhirajaramaya before they were invited to continue with the remainder of the programme. Mrs Senanayake offered the traditional Dehet Wattiya (tray of betel) and invited them to commence the blessing ceremony. After the Buddha Pooja, offer of alms took place with the participation of all Seva Vanitha chairpersons at Regimental levels.