How Coomaraswamy was appointed as CBSL Governor 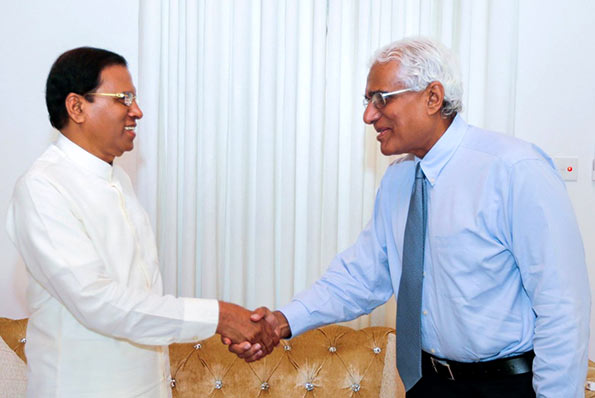 Although he is no longer the Central Bank Governor nor is he in the country, the political crisis he left behind, which threatened to dismantle the United National Front for Good Governance (UNFGG) Government, was only averted by appointing Dr. Indrajit Coomaraswamy as the Governor.

Considering that the Prime Minister last week appointed Coomaraswamy to a committee tasked to prepare a report on improving economic relations with the rest of Asia, it can be assumed that the Prime Minister would be the happiest of this appointment. Among the members of the above mentioned committee are Charitha Ratwatte, who Wickremesinghe insisted must replace Mahendran, R. Paskaralingam, one of PM’s close allies and Arjuna Mahendran.

In addition while Wickremesinghe has shown a willingness to change his nominees, as long as his desired outcome is achieved, President Maithripala Sirisena had insisted on one person, Nandalal Weerasinghe who is the most senior Deputy Governor in CBSL.

While it is acknowledged that Coomaraswamy is extremely professional, he also holds views that are antithetical to many Sri Lankans. He views the Economic and Technology Cooperative Agreement (ETCA) with India favourably and was a part of the negotiating team.

Tug-of-War between MS and RW

The tug-ofwar between President Maithripala Sirisena and Prime Minister Ranil Wickremesinghe regarding the appointing of a new Central Bank of Sri Lanka Governor had pushed the United National Front for Good Governance (UNFGG) to the breaking point. Even by Friday afternoon the two men had not reached a consensus regarding whom to appoint as Wickremesinghe was still adamant on appointing Charitha Ratwatte as the Central Bank head, a demand he sent in writing, while Sirisena wanted to appoint Deputy Governor Nandalal Weerasinghe.

Despite the almost universal animosity, except of those who are close to Wickremesinghe, against Mahendran, the Premier attempted to extend the tenure of the former Central Bank Governor even on 30 June, Mahendran’s last day.

At a meeting of the Monetary Board convened suddenly on Tuesday, Deputy Governor P. Samarasiri, a Mahendran loyalist, placed a letter from the Attorney General which stated that an ‘acting’ appointment was permissible. Mahendran then proposed Samarasiri as acting Governor, which was objected to by Treasury Secretary Dr. R.H.S. Samaratunga, who stated that there was no such provision in the Act for such an appointment.

On the same day the Prime Minister and Malik Samarawickrama sought an audience with the President over the appointment.

Earlier that day the President tweeted that he will appoint a new governor to the Central Bank within a few hours and at the Cabinet Press Briefing which commenced at 11:00 a.m. State Minister of Finance Lakshman Yapa Abeywardena reiterated the point adding that someone ‘experienced’ will be appointed. This was a reference to Nandalal Weerasinghe who is the most senior Deputy Governor. The President has told his close allies that he would visit the Central Bank in the evening, talk to the Deputy Governors and appoint Nandalal Weerasinghe as the next Governor.

However, after it was reported that both Sirisena and Wickremesinghe had visited the Central Bank, a series of phone conversations occurred between Sirisena allies who had sensed that something had gone wrong. Sirisena had not invited Wickremesinghe to accompany him and in a way the Premier had gatecrashed into what was to be a confidential meeting between the President and Deputy Governors.

After the meeting was over the Prime Minister insisted that if Mahendran’s tenure is not extended, Charitha Ratwatte should be appointed the next Central Bank Governor. A request the President rejected and after leaving the meeting it is reported that the Prime Minister threatened to pull out of the unity government.Of course this was reported to the President who was obviously upset as he had dissolved Parliament last year in a bid to save Wickremesinghe’s reputation after the COPE committee led by DEW Gunasekara threatened to publicize its findings on the first alleged Treasury Bond scandal.

Sources close to the President said that he was adamant to appoint Nandalal Weerasinghe and that there is enormous pressure from his closest advisors not to give in to the demands of Wickremesinghe. However, it seems that the President once again gave up on a pet idea to appease the Prime Minister, like he did with the 20th Amendment.

Why Ranil insisted on Ratwatte?

Charitha Ratwatte has been working with Ranil Wickremesinghe for decades, and in the 1970s and 80s he was renowned for his capacity for work and efficiency. His tenure as the Chairman of the National Youth Services Council is still known as the golden era of the institution. Whenever Wickremesinghe has come into power he has appointed Ratwatte to key positions and currently he holds the position of Senior Advisor to the Prime Minister.

While Ratwatte’s early career has been universally commended, the role he played during the 2001–2004 United National Front government and the last 18 months of the UNFGG government has been widely criticized. The controversial ‘Regaining Sri Lanka’ initiative, which was widely criticized by various stakeholders, was the brainchild of Ratwatte

“Ratwatte is one of the key figures that led to the defeat of the United National Front (UNF) administration. His ‘Regaining Sri Lanka’ initiative was not only condemned by the general public but also by some of the staunchest UNPers. Ratwatte’s appointment will lead to the implementation of neo- liberal economic policies, which will ensure austerity, which has proven ineffective across the world; increased taxation and enforce the corrupt systems created by the Rajapaksa administration and sustained by men like Arjuna Mahendran,” Rajith Keerthi Tennakoon, the advisor to the Anti Corruption Front (ACF) who revealed the second Treasury Bond scandal said.

He alleged that the Prime Minister is adamant on appointing one of his nominees as he feared the appointment of Dr. Nandalala Weerasnghe or anyone else loyal to the President would be the beginning of a serious prosecution against Mahendran.

“The COPE was not given the necessary data to proceed by the CBSL. If Weerasinghe was appointed the COPE and other investigative bodies would have been given access to data regarding the two Treasury Bond scandals,” he said.

Tennakoon, who also held a key position during the UNF government, claimed that many UNP leaders had criticized not only the ‘Regaining Sri Lanka’ initiative but the austerity measures imposed by Wickremesinghe and his allies. “This is a familiar tale. The Prime Minister behaved in a similar manner between 2001 and 2004. He antagonized former President Chandrika Bandaranaike Kumaratunga and pushed her into a corner so that she lashed out, which was natural. He is doing the same thing now.

The UNP social media unit kept attacking those who opposed the Prime Minister’s views. President Sirisena has been very patient and accommodative of Wickremesinghe. He cared so much that he dissolved Parliament last year to save Wickremesinghe, in doing that he gave up his pet project of electoral reforms which would have been passed soon after 19A. I will not be surprised if the President appoints a third party who is qualified,” Tennakoon said.

The appointment of Dr. Coomaraswamy seems to have averted a political crisis that might have led to the dismantling of the UNFGG Government. However, the events that transpired last week, i.e. the tug-of-war between the President and the Premier which stretched Sirisena’s patience to its limits, is a bad omen for the Unity Government. What transpired last week, is particularly worrying because this was exactly how Wickremesinghe behaved with then President Chandrika Bandaranaike.

Both Wickremesinghe and Bandaranaike come from a similar social background, hold similar world views and yet Wickremesinghe sidelined Bandaranaike from important decisions, forgetting that she was the Executive President. While the 19th Amendment to the Constitution stripped some of the powers of the Executive President and despite his hesitancy in using the powers vested in his office, Sirisena is still very much all powerful and Wickremesinghe must keep that in mind to avoid a repeat of 2004.

10 Responses to How Coomaraswamy was appointed as CBSL Governor

Home » How Coomaraswamy was appointed as CBSL Governor