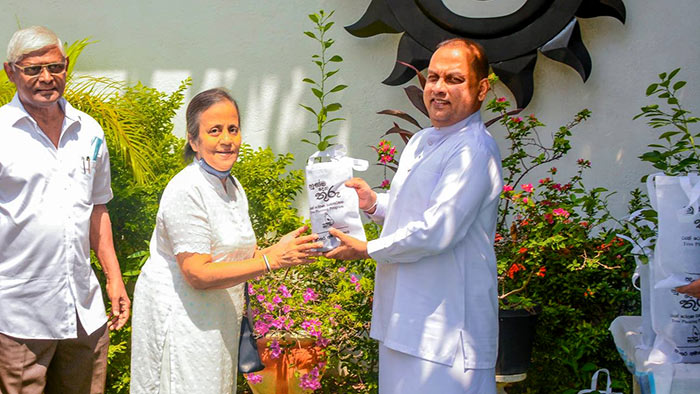 Over 107,000 saplings have been planted with the introduction of the Husma Dena Thuru National Tree Planting Programme in the last four months, said Environment Minister Mahinda Amaraweera.

Amaraweera said that this National Tree Planting programme is now very popular and many parties have extended theri support for it and have even initiated their own programmes.

Minister Amaraweera was speaking while participating in a tree planting programme held in the Angunakolapelessa area he also distributed plants to the people of that area.

He said, “After I started my tenure as the Minister of Environment, I introduced the 20-point environmental programme called Haritha Hetath. Its main tree planting programme is the Husma Dena Thuru National Tree Planting Programme.

“Under this we aim to plant two million saplings in the next four years,” he said.

“The Government did not spend a single rupee for this. All the money was given to us by the private sector. People from all walks of life have come foward to extend their support to this National Tree Planting Programme. Therefore, we will continue to expand this programme for the next four years without spending any Government funds,” he said. “A tree is a wonderful life giving source. Mother Earth gives us trees by composting the garbage we dump on the earth as human beings. Not only do trees privide us with food, but they also supply us the Oxygen we need to breathe. That’s why we called this programme Husma Dena Thur, he added.

“A human being needs 550 litres of Oxygen per day to live. It weighs about 2.5 kilogrammes. To provide this quantitity of Oxygen for one person to breathe, at least 10 trees must produce Oxygen. Some people who live on the oxygen that produces 10 trees a day do not plant at least one tree for the rest of their lives. Our ancient ancestors treated Mother Nature with utmost respect. Today, people in their greed for money are cutting down the trees that give us breath. “Seattle, the leader of the Red Indians, has said that once a man cuts down a tree, eats the last fish and drinks the last drop of water, he will realize that money cannot be eaten,” Minister Amaraweera said.

“If someone destroys the forest, he is like a murderer. Therefore, we are doubling the penalties for destroying the environment under the new National Environmental Act. Also, the fines will be increased by 10 fold more than that of the current levels. Those who work for the protection of the environment will be evaluated and they will be honoured at an awards ceremony.