“I have not retired, resigned or vacated office:” Mohan Peiris 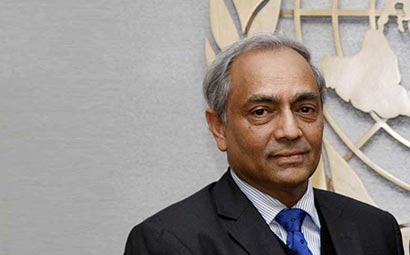 I have not retired, resigned or vacated my office of Chief Justice, but, due to exertions by external forces reinforced by an extra judicial chain of events, find myself displaced from office by an unconstitutional process having functioned continuously in my appointment for over two years. There are times when might overtakes right and the helpless have to succumb to injustice.

Maintaining the dignity and decorum associated with the office of the Chief Justice and ensuring its respectability and propriety is my prime concern. As the pinnacle of our judicial administration, it should be preciously safeguarded in its pristine purity; now and for the future – in the need to preserve justice as a wholesome entity.

I abhor and despise and do not encourage the enactment of street dramas or of invoking vengeance by resorting to horrific practices of the occult or encourage rabble rousing on pavements by a few members of the legal fraternity with their storm troopers or rouse the judiciary to come to the assistance of an affected Judicial Officer, as witnessed in the recent past. Offering patronage to such events demeans the office of the Chief Justice. It promotes division or dissension within the Bar for selfish returns.

I look upon myself as a Chief Justice and a citizen, who was empowered to carry out the solemn duty of ensuring the sovereignty of the people in the midst of great institutions such as the Judiciary and the Bar. These Institutions must retain their dignity perennially – not for a passing hour or a day of glory and must not descend to a pedestrian level.

I look upon the example set by Chief Justice Neville Samarakoon Queen’s Counsel, who held his head high and never sacrificed principle or sought to divide judges and lawyers on the plight that befell him.

I was appointed to the post of Chief Justice after my predecessor was removed by the required Parliamentary majority (155 to 49) as reflected in the Hansard of 11.01.2013 that carries the following endorsement.

“RESOLUTION AS PER ARTICLE 107(2) OF THE CONSTITUTION FOR A MOTION OF PARLIAMENT TO BE PRESENTED TO HIS EXCELLENCY THE PRESIDENT FOR THE REMOVAL OF THE HON. (DR.) (MRS.) UPATISSA ATAPATTU BANDARANAYAKE WASALA MUDIYANSE RALAHAMILAGE SHIRANI ANSHUMALA BANDARANAYAKE FROM THE OFFICE OF THE CHIEF JUSTICE OF THE SUPREME COURT OF THE DEMOCRATIC SOCIALIST REPUBLIC OF SRI LANKA – Passed”

At the stage of debate, on 11.01.2013 a query was raised by two opposition Members of Parliament regarding the wording of the resolution that was being debated upon.

Thereafter, the Hon Speaker considered this matter and pronounced the following ruling on the validity of the resolution;
Hansard of 11.01.2013, Columns 650,651

This Ruling is final and conclusive and those who exercised their vote on the same are debarred from contesting its validity.

It is pursuant to this Ruling that the House proceeded to vote on the aforesaid resolution as clarified by the Hon Speaker.

I would also like to point out that the Hon. Prime Minister, Mr. Ranil Wickremesinghe also participated in the debate and voted on the resolution, but against it.

It is also evident from the Parliamentary proceedings of that debate, which went on for two consecutive days, that the House deliberated on the Report of the Parliamentary Select Committee that had found Dr. Shirani Bandaranayake guilty of some of the charges. Such report had been duly tabled in Parliament on 08.12.2012 and all the members were furnished with copies of the same. Further the procedure as set out in the Constitution and the Standing Orders was duly followed.

Thereafter the former Chief Justice was removed by an order of the then President and I was appointed by a warrant to the post of Chief Justice on 15.01.2013, with the concurrence of the Parliamentary Council which comprises of Government and Opposition Members.

It is significant that Hon Rajitha Senaratne was a member of panel of inquiry that probed the charges against Dr. Shirani Bandaranayake and found her unanimously guilty with the other members on some charges and acquitted on others and The Hon President Maithripala Sirisena spoke and voted in favour of the removal of the former Chief Justice.

The Hon Maithripala Sirisena in fact whole heartedly supported the entire process during the debate and in fact went on to state thus ;
Hansard of 11.01.2013, Column 528

This is quite contrary to the position taken up now that my appointment was purportedly void ab initio. I am saddened that this machination comes after attempts to coerce me and later intimidate me into stepping down.

It must be noted that I could only have been removed from Office in terms of the specific provisions contained in Article 107 (2) of the Constitution after an address of Parliament.

Lastly, it appears that the Executive has now sought to arrogate to itself a non existent power by usurping the power of the legislature and thus engage itself in an unconstitutional process in an endeavour to remove me as the Chief Justice. This is unlawful and violates the principle of the separation of powers which is a fundamental feature of our Constitution and renders the exercise futile. As such all consequential acts will be tainted with illegality.

Home » “I have not retired, resigned or vacated office:” Mohan Peiris