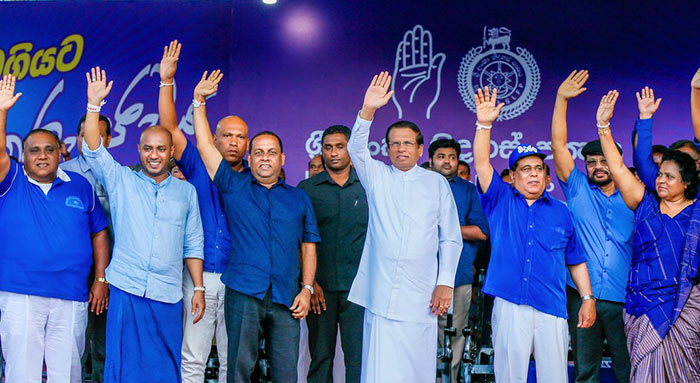 President Maithripala Sirisena yesterday expressed his desire to continue in politics beyond 2020. “I will not retire in 2020,” the President emphasised, addressing a mammoth May Day rally organised by the SLFP led UPFA at Chenkaladi in the Batticaloa district.

The President qualifying his statement said that there are so many other issues to be addressed and solutions to be found.

“The country needs honest politicians and the immediate need is for them to come together to serve the country,” the President said.

“There are so many issues to be resolved and I am not going to retire before solving them.” The President posing a question at the audience, queried as to how many of our political leaders are free from murder, corruption and fraud. “We need political leaders with an unblemished character.

“Some people are day dreaming of establishing a new government in 2020. We shall be with the poor, the down trodden and the intelligentsia.

People can talk of fairy tales but they cannot understand the problems facing the communities,” the President said.

“We protect the country’s culture while respecting Buddhist,Hindu, Islamic and Christian values,” he said.

The President said that the Sinhala,Tamil and Muslim communities are living amicably all over the island today, nearly a decade after the devastating war which engulfed those areas. My fervent wish is that a tragedy of the kind should not happen again in our country,” President Sirisena added. The President added that the people running the government and who hope run the government must understand the intricacies of the problems faced by various communities.

“Everyone knows who the rogues are, some are saying that we are blindly following the dictates of others,” the President said. The President insisted that the SLFP has not split nor has it become weak adding that the party will introduce a viable programme to the country.

“Some people say that the party has weakened,but, we have not weakned.There was a time when the SLFP had been reduced to seven seats in Parliament and the party had been divided into several factions,” the President said.

“We shall make the SLFP a truly Democratic party. I request the people of Mother Lanka to join me in my new programme of work,” the President said.

He said that the party will undergo a comprehensive reform drive and he is committed in transforming it to be more people-centric..

“To establish peace and harmony in the country, all political leaders must speak the truth and work for a united and undivided Sri Lanka. The need of our is the honest conduct of the politicians,” President Sirisena said.

“To establish peace and harmony in the country,political leaders of all parties must speak the truth and pave the way for a united and undivided Sri Lanka. The need of the hour is the honest conduct of politicians,” the President said.

Several SLFP Parliamentarians who resigned from their Ministerial portfolios after they voted for the No Confidence Motion against Prime Minister Ranil Wickremesinghe were also present at the rally.