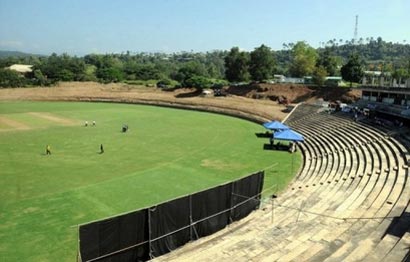 The Pallekele Cricket Stadium in the central provincial district of Kandy pictured in November, 2009.

COLOMBO (AFP) – Sri Lanka’s new venues for next year’s World Cup are on track but the refurbishment of an existing stadium is behind schedule, the International Cricket Council said on Monday.

Sri Lanka, which is co-hosting the tournament with India and Bangladesh, is set to stage 12 matches at the Premadasa stadium in Colombo and at the newly built grounds in Pallekele and Hambantota, outside the capital.

“With the exception of the Premadasa stadium, others are on track to play a few first-class and international matches before the tournament starts next February,” ICC’s structural engineer, Eugene van Vuuren, said.

Sri Lanka Cricket is spending around eight million dollars to renovate and re-lay the pitch at the Premadasa stadium, an existing international venue.

“Premadasa is a worry for me,” added ICC pitch consultant Andy Atkinson at the end of a three-day inspection trip.

“I would like to get some games in to try out the pitch conditions before the big show next year.”

Of the two new stadiums, the 10-million dollar Pallekele stadium in the central district of Kandy has hosted an under-19 match.

The Suriyawewa Stadium in Hambantota, in the deep south, is due to play its maiden first-class domestic match in July.

The Suriyawewa Stadium will host its maiden international game when Sri Lanka play Canada in the World Cup on February 20. The other match at the venue is between Pakistan and Kenya on February 23.

There are few hotels in the coastal Hambantota area and the authorities plan to charter a cruise ship to be anchored offshore to accommodate fans.

Dhiraj Malhotra, the ICC’s World Cup co-ordinator, said it was heartening that Sri Lanka was preparing three venues in the short space of a year.

“I don’t see much of an issue with the Sri Lankan facilities, everything is slowly falling into shape,” Malhotra said.

The 43-day tournament will be played across 13 venues in India, Sri Lanka and Bangladesh and ends with the final on April 2 at Mumbai’s Wankhede stadium.

Pakistan, the fourth Test-playing nation in South Asia, were removed as co-hosts due to security concerns in the volatile country.