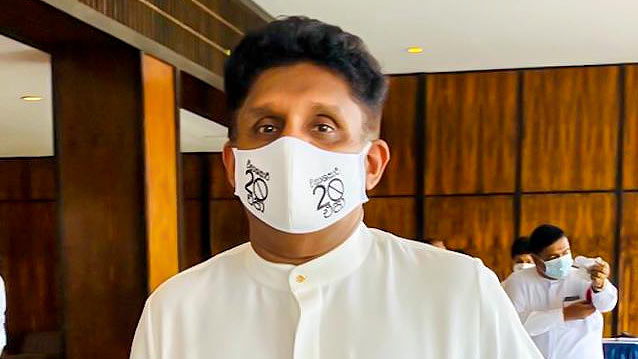 The main Opposition, Samagi Jana Balawegaya (SJB) yesterday (22), in Parliament, expressed consent for the implementation of the capital punishment.

SJB and Opposition Leader Sajith Premadasa, participating in the second reading stage debate, on the draft Bill of the 20th Amendment to the Constitution, said drafting laws to implement the death penalty was an urgent need of the time.

At this juncture, Justice Minister, President’s Counsel M.U.M. Ali Sabry intervened and questioned him as to whether it was his personal standpoint or the position of his Party.

Premadasa: “We do not have a personal standpoint. We have Party standpoints.”

Ali  Sabry: “That is good, now we know that your Party’s position is to implement the death penalty.”

Premadasa: “I do not know why the Justice Minister opposes implementing the death penalty against terrorists and drug dealers.”

Ali Sabry: “That is fine because your own Party men had gone before the Supreme Court against the implementation of the capital punishment. We can take this down as your position.”

Premadasa said that the SJB stands for power sharing and not to concentrate power around one organ of the Government.

“United States President Abraham Lincoln defined democracy as the Government of the people, by the people, for the people, which means that it is a social contract between the public and the rulers.”

“Why do you fear the mechanism that was introduced under the 19th Amendment to the Constitution to bring about a just society?

“But this is a struggle for power between the President and the Prime Minister. But what is correct is to bring checks and balances between the two offices.

“The 20th Amendment is not for the betterment of the public. What we have got to do is to set up a National Security Council and a new Health Act. The death penalty should be brought for those who engage in terrorist activities and those who engage in drug trafficking and that is the stance of the SJB.”