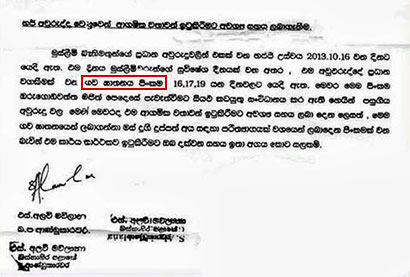 ‘Damned if you do, damned if you don’t’ seems the challenge posed to Buddhists and an increasing number of indigenous people in different corners of the world as they face new cult type incursions. Not only is the new cult enveloping victims among the Muslims but by penetrating the hyped liberal notion of ‘secular multiculturalism’ the demands of Muslims take center stage pushing indigenous cultures not only to the background but ring alarm bells to the possible extinction, annihilation of not only the indigenous culture but the possible conversion of the people of an entire country to Islam in time to come e.g. Maldives.

When a longstanding Muslim Governor of the Western Province in Sri Lanka suddenly issues on a State letterhead carrying at the top of the letterhead the representation of the Buddhist ‘Dharma cakra’ a request for public officials, majority of whom are Buddhist to take part and provide support to a ‘gava gathana pinkama’ (cattle slaughter / sacrifice meritorious act), one begins to wonder in which direction this country is now heading.  In officially requesting Buddhists to violate their Buddhist first precept of venerating life by aiding and abetting cattle slaughter for the Hadj festival the Muslim Governor has crossed the boundary of respect and courtesy due to the indigenous religion and culture.

Buddhism and Jainism are the only two religions in the world to treat both human and non – human sentient beings with a high sense of reverence for life, compassion and gratitude for services rendered to humans by animals such as the cow. There is no place in Buddhism for destruction of life of animals to appease gods. The Buddha condemned such practices unreservedly. It is these Buddhist values that form the core of the civilization of this country and prevail to this day. The Buddhist public expect these values to be respected by the descendants of those who arrived in this country much later bringing a form of culture and attitude to the life of non – human sentient beings as anything but intolerant and deplorable, and a defective code of ethics in respect to the treatment of animals.

The Dhammapada encapsulates the attitude of Buddhism and its reverence for life as follows:

Verse 129 – Of Others Think Of As Your Own Self

All tremble at force,
of death are all afraid.
Likening others to oneself
kill not nor cause to kill.

Explanation: All tremble at violence, all fear death. Comparing oneself with others do not harm, do not kill.

All tremble at force,
dear is life to all.
Likening others to oneself
kill not nor cause to kill.

Explanation: All are frightened of being hurt or any threat to one’s life. To all life is dear. Seeing that others feel the same way as oneself, equating others to oneself, refrain from harming or killing.

Therefore, the act of issuing a letter by a Governor who had been holding the post for numerous years to suddenly request Buddhist public servants to take part and provide assistance to animal sacrifice and cattle slaughter and view it as a ‘ pinkama’ (meritorious deed) is tantamount to a perversion of Buddhist values well entrenched in this country. It is a trespass on the Buddhist ethos and brings to the level of humiliation all that the Buddhists are fighting to save in a world where Buddhists wish to co-exist peacefully with Muslims in spite of being well aware of the historical reality that Muslim nations have all been created by conquest and conversion making inroads even to this day of what constitutes traditional Buddhist space and territory.

The cries for mercy and agony of animals awaiting death and their behavior in the last moments of their precious lives including urinating and defecating unfortunately have no impact on those who are desensitized to suffering of other living beings, and who believe that shedding of blood and sacrificing the lives of others is the way to earn points from ‘God’ and one’s ‘reward in heaven’.

To be asked to view cattle slaughter as humane and meritorious is a huge insult to Buddhists.The only real pinkama associated with cattle slaughter is the granting of freedom to the animal from slaughter by paying the Butcher or the owner of the animal destined for slaughter. This is practiced heavily in Sri Lanka by lay Buddhists, monks and Buddhist organisations. This is true religion.

The state machinery of a Buddhist country (Article 9) should be associated with granting freedom to animals. Arahant Mahinda recommended it to King Devanampiyatissa and it led to the establishment of the world’s first wild life sanctuary in Mihintale 2300 years ago, and a resolve on the part of succeeding Buddhist Kings of Sri Lanka to follow suit in extending state protection to animals.

Buddhist public servants have a moral conscience and they must be allowed the right to exercise their moral conscience and refuse to carry out orders which are repulsive and violate their fundamental Buddhist religious beliefs. If it is in order for the Muslims to claim the right to conduct themselves according to their religious beliefs (special Friday prayers, dress code or unwillingness to serve alcohol or pork), likewise such rights should also be extended and recognised among Buddhists.

The conduct of a former Muslim minister and present Governor in brazenly calling upon Buddhist public servants to support ‘gava gathana’ (cattle slaughter) as it is a ‘pinkama’ (meritorious act) shows the extent to which Islamic values are rapidly replacing Buddhist values and the contempt some of these people have for Buddhist ethics and our ways of living. It is also an indication of the extent to which Islamic influence has grown to now be demanding from 74% Buddhists to view cattle slaughter as meritorious act completely slapping the doctrine with which Buddhism rests and bringing up exactly how (in)tolerant and (dis)respectful Islam and Muslims are of the indigenous Sinhala Buddhist race while accusing Buddhists.

Peaceful co-existence between communities can be achieved only when those who came later with different beliefs and cultures are prepared to respect the original foundational ethos of a country long observed for more than two millennia, and not by disregarding them, manipulating them, bypassing them and overruling them. 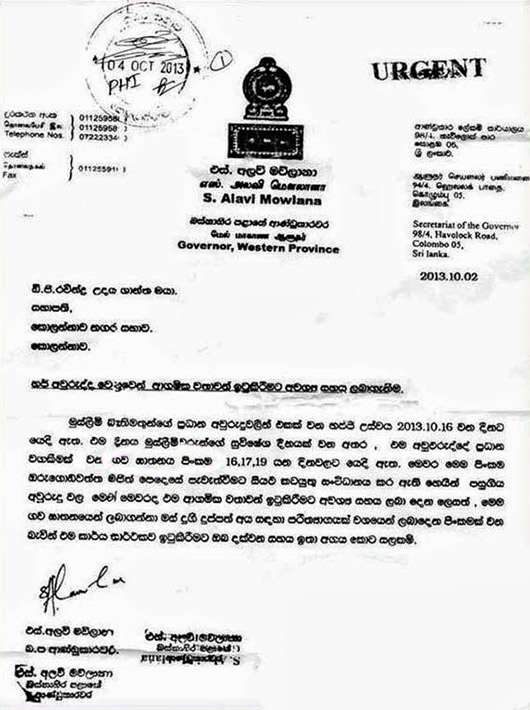