Docs to strike from Nov. 4 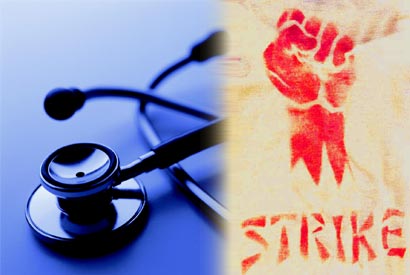 Government doctors have threatened to launch a countrywide strike on Nov. 4 over the delay in implementing the service minute.

Government Medical Officers’ Association (GMOA) media spokesman Dr. Navin de Soysa yesterday warned the government that his organization had decided to launch the strike due to the constant delay in implementing the service minute, which had led to the grading of doctors, attached to various specialties, being delayed for two years.

Dr. Soysa told the media that the promotion scheme of doctors, through their service minute, had been recommended by the Public Service Commission (PSC) in 2011. The Health Ministry had also agreed to implement the contents of the service minute. Even the Public Administration Ministry and the Finance Ministry had agreed to implement it. But, the implementation had been relegated to limbo.

He added that the scheduled countrywide strike would be the first protest against the failure of the government to implement the service minute.

Dr. Soysa said that around 17,000 doctors, in the government service, would keep away from normal work on Nov. 4, commencing 8.00 a.m. But, all emergency services would be attended to, including child, maternity and cancer patient care.

He said that the GMOA Central Committee would meet next Sunday to decide the future action.

GMOA President Dr. A. Padeniya, when contacted, said that even President Mahinda Rajapaksa had instructed the relevant authorities to implement the service minute, but to no avail. “We cannot be waiting too long. Two years have passed, but there is no sign of implementing the minute. The GMOA is constrained to launch a countrywide strike on November 4 to win its legitimate rights.”

1 Response to Docs to strike from Nov. 4