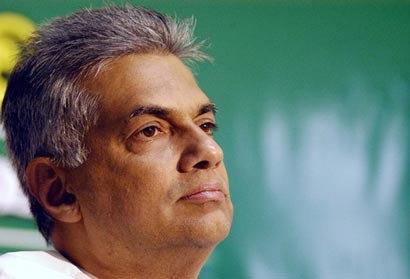 Opposition and UNP Leader Ranil Wickremesinghe today requested the government to increase salaries if it is unable to reduce a fuel price that was jacked up recently.

Mr. Wickremesinghe who made a special statement in Parliament today said the government has two alternatives to provide some relief to the people who had been hit by the surging fuel prices. One option he said is to increase salaries and the other is to revise the fuel prices.

“All sections of society except the rulers are bearing the brunt on the fuel price increase,” he said pointing out that fishermen,
farmers and private vehicle owners are hit by this crisis.

Painting a grim picture on the country’s future, he said the increase in the prices of other essential items such as gas is inevitable.

Mr. Wickremesinghe said the government had failed to come up with a valid reason to justify the price increase. He said different ministers had come out with different reason for the price hike from time to time.

He charged that government institutions such as the CPC are used by the rulers as a means to fill their pockets. Quoting Minister Sarath Amunugama who had said the CPC is a monster that is eating up the economy, the opposition leader said this monster had been created by this government alone.

He made this point by recalling that the CPC was a profit making venture during the UNP regime.

Mr. Wickremesinghe who referred to the subsidy schemes that have been introduced by the government said these schemes are not practical. He also questioned as to why individual vehicle owners had not been given a subsidy.

He charged that the crisis created by the government had ended up with the killing of an innocent fisherman.