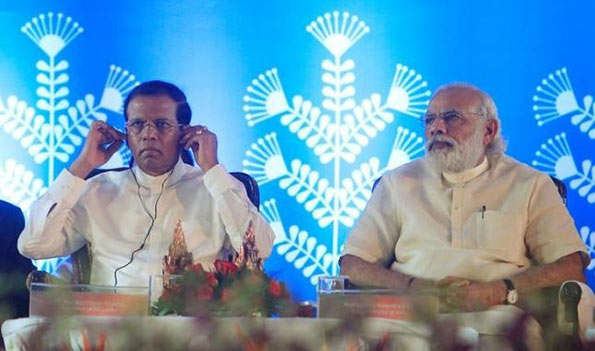 India has told Sri Lanka that it can help put up a Liquefied Natural Gas (LNG )-fired power plant as desired by Sri Lanka at Sampur or any other location, But at the same time, it  has conveyed to it the need to ponder over the pitfalls in switching over from coal to LNG.

This will be conveyed at a meeting of the Joint Working Group (JWG) which might be held in October either here or in New Delhi, informed sources told Express.

When President Maithripal Sirisena met Indian Prime Minister Narendra Modi in May this year, Sirisena requested Modi to call off the coal-fired power project on environmental grounds. Modi said that he would ask his officials to consider the matter.

Subsequently, a Joint Working Group (JWG) was set up for bilateral discussions on the question.But the JWG has not met to date. But earlier this week, the Sri Lankan government told the Supreme Court in a case filed by environmentalists, that it has decided not to go for a coal-fired plant in Sampur.

This unilateral decision jolted the Indians. But they have been telling the Sri Lankans that they are ready to help set up an LNG-fired plant despite reservations about LNG’s suitability for Sri Lanka. Keen to be a player in the energy field in Sri Lanka, the Indians had sent a team from the public sector PetronetLNG Ltd.,to discuss the witch over to LNG with the Sri Lankans.

But an issue that the Sri Lankans will have to think deeply about is that LNG has to be imported and stored in terminals and conveyed to the power plant through a pipelines. If LNG is to be brought from Qatar or Kochi, Kerawalapitiya in the Western Province would be a better location for the power plant rather than Sampur in the  Eastern Province.

It is also felt that to set up one terminal for one plant will not be economical. Sri Lanka would therefore have to have a larger plan to use LNG, not only in power plants, but in industries and in households to gain from the economy of scale.

Then there is the question price fluctuations. Today LNG prices are low, but there is no guarantee that it will always be so as oil prices fluctuate greatly. Coal, on the other hand, is guaranteed to be cheaper and world production, which had gone down, is picking up.

Setting up an LNG fired plant will also take time. According to the Indian Power Ministry and the National Thermal Power Corporation, it could take anywhere from three to seven years to set up a plant with the all necessary agreements.

But Sri Lanka is likely to face power shortage from 2018 onwards if some power plants are not put up quickly. According to power rights activist, Bandula Chandrasekara, as it is, there is an 8 percent rise in the demand annually. This will gallop if the multi-billion dollar Colombo Financial City, the Western Province Megapolis, the Hambantota Economic Zone and the Sampur Economic Zone projects come up.

Ceylon Electricity Board engineers are urging the government to stick to coal in the Sampur project and have a mix of coal and other fuels in future projects so that plants can be built quickly and the country can avoid the expected power shortage from 2018 onwards.

The Council of Ministers is divided, with one section being dead set against coal and the other willing to go for a mix of fuels including coal. Minister of Power Ranjith Siymbalapitiya told the media on Thursday, that coal would remain an option.

To avoid crippling shortages, Sri Lanka’s long time power plans would have to be finalized by April 2017 according to the Public Utilities Commission. -Agencies