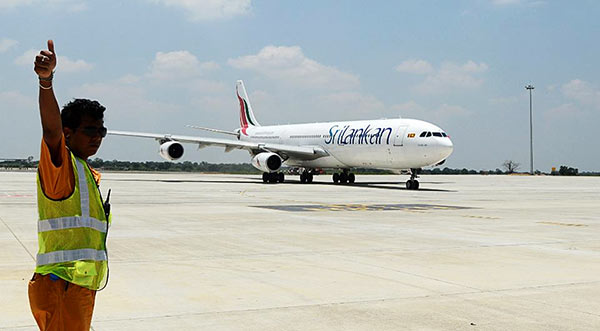 An Indian company has emerged with a bold plan for taking over Sri Lanka’s struggling Mattala Rajapaksa International Airport (MRIA). The proposal, which would see India pumping $205 million into the airport for a 70% share for 40 years, was approved by Sri Lanka’s Civil Aviation Minister Nimal Siripala de Silva and sent on to the country’s cabinet for review. While Sri Lanka has received a total of eight proposals from various other parties — including China — to take over the airport, the Indian plan is reportedly being reviewed on its own.

For many years, there was a very strong demand for Sri Lanka to add additional international aviation capacity. Air traffic through Colombo was getting too heavy, and the country either had to add an additional runway there or build or expand another airport elsewhere. At a cost of $209 million —  most of which coming from China — Sri Lanka chose the later option, building Mattala International far out in southern Hambantota district, a 250 kilometer drive from Colombo.

This airport started out as a key part of an ambitious plan by Sri Lanka’s former president Mahinda Rajapaksa to transform his extremely rural hometown region into Sri Lanka’s number two metropolis. In addition to the airport, there would be a $1.4 billion deep sea port, a large industrial and export processing zone, an exhibition center, a large cricket stadium, and a hotel and leisure area that would be connected together by some of the country’s best highways. The idea was that all of these large projects would rise up together and support each other. It was an all or nothing wager placed on creating an entirely new economy out in the middle of the jungle.
However, this great scheme has yet to come to fruition. Being located in a remote area in an under-developed part of the country, Mattala airport had difficulty attracting both passengers and airlines. Only one or two flights per day currently stop there, and, according to the Sri Lankan government, the 3,000 flights that touched down at the airport in 2014 served just 21,000 passengers — a mere seven passenger per plane average. This has led to MRIA being dubbed the “world’s emptiest international airport,” with its vacant corridors, gates, and tarmac serving as more of an attraction for curious journalists than actual passengers.

This squalid state of affairs has led to the airport suffering major financial losses, with the government claiming that MRIA has hemorrhaged $112.9 million as of the end of last year. It has become clear that Mattala International would not be able to provide the financial sustenance necessary for Sri Lanka to pay back the $190 million of loans that the Exim Bank of China provided to build it anytime soon.

To these ends, Sri Lanka has been looking for other entities to take over Mattala International since last June. Some takers have actually emerged, with IZP, a Chinese informational technology company, leading the pack. However, the air waves had gone silent about the state of these proposals until the Indian offer came in last week.

Is India trying to use the Mattala airport to counter China?

India’s offer to take over the Mattala airport came hardly two weeks after a landmark deal which saw a 70% share of the Hambantota deep sea port being sold to China for 99 years. The port and airport are within a half hour drive of each other, and are part of the same conurbation of development. When viewed in this light, it appears as if the timing of India’s offer may not have been a coincidence, and could perhaps be another move by India to counter China’s growing presence in the South Asian region — in the vein of India’s prospective deal to develop Sri Lanka’s Trincomalee port or a recent partnership with Japan to engage in large-scale infrastructure development in Asia and Africa.

However, if this was the case, it would fall right within Xi Jinping’s rhetoric about the Belt and Road Initiative (BRI) and the “community of common destiny” that it is intended to provide impetus for.

It is common to view the BRI as a Chinese expansionist strategy, with China vying to take control of as many of the world’s emerging infrastructure assets as possible. But this isn’t necessarily the case. China gains power through the BRI not by being omnipotent and competitive, but through the leverage that is gained through what they dub as “mutually beneficial partnerships” with other countries. Ultimately, China controlling the Hambantota deep sea port and India running the Mattala airport is an ideal Belt and Road arrangement.

Since the start of the BRI in 2013, China has been trying to get India on board — which is something that is fundamental for the initiative’s success in South Asia. On numerous occasions, China has invited India to participate in their escapades in Sri Lanka; trying to get Indian participation in the Colombo Port City project as well as at the impending industrial zone at Hambantota. Despite India’s very public opposition to China’s BRI, they are very much wrapped up in the endeavor — and moving in to take over the Mattala airport would actually be another major step in this direction.

3 Responses to India To Sri Lanka: Forget China, We Want Your Empty Airport