Indo-Lanka Accord a Nullity 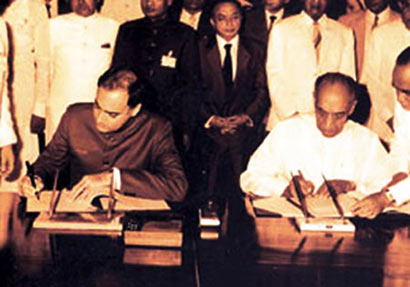 The Vaddamarachi operation launched by the Sri Lankan Armed Forces was to protect Sri Lanka’s territorial and the political independence of Sri Lanka from Indian armed and Indian trained terrorist groups. India unlawfully interfered in that operation with the use of force by violating Sri Lanka’s Air Space with a so called “”Parripu drop”” forcing Sri Lanka to sign the Indo-Lanka Accord under threat of force and duress.Signing of Indo – Sri Lanka Accord

According to the Vienna Convention on the Law of Treaties (VCLT) [Article 52] ‘A Treaty is void if its conclusion has been procured by the or use of force, in violation of the principal of international law embodied in Art 2 (4) of the UN Charter.’ The said article reads, ‘All Members shall refrain in their international relations from the threat or use of force against the territorial integrity or political independence of any state, or in any other manner inconsistent with the Purposes of the United Nations.’

This does not include economic or political pressure, and does not include the lawful use of force; for example, the 1938 Munich Agreement between Germany & Czechoslovakia was void because of the pressure on the Czech Government.

The Indo-Lanka Accord was not signed in circumstances where the use of use of force in relation to Sri Lanka’s territorial integrity and political independence was lawful. This violation of Sri Lanka’s Air Space was preceded by India’s training and arming terrorist groups such as the LTTE and TNA which targeted civilian and military targets within Sri Lanka constitutes India did to Sri Lanka similar to the circumstances what Hitler did to Czechoslovakia.

On June 3rd 1987, ”This is the Eagle Formation. Do you read me?” Narula the pilot leading the intrusion into Sri Lankan air space radioed to Sri Lankan airport authorities during the infamous Parripu airdrop an operation mean’t to threaten and intimidate Sri Lanka into submission, so that India could force the Indo-Lanka Accord down Sri Lanka’s throat. The message was repeated four times by the Indian pilots, to no avail, with no reply from Sri Lanka.

Supplies were dropped by the five Soviet-built Antonov-32 transports at 5 p.m. near a railway station 4 miles north of Jaffna City. The whole world condemned the Indian action.

The operation, which met no resistance, began from the southern Indian city of Bangalore and took 2 hours and 10 minutes. Sri Lanka was given only 30 minutes’ notice and warned not to shoot down any Indian plane that was to violate Sri Lankan Air space or face grave consequence by the then High Commissioner for India J. N. Dixit.

Air Vice Marshal D. Keelor, who was in charge of the entire operation, latter said: ”I am not involved in this. This was decided by the government,” Perhaps to clear his sense of guilt at this unprecedented immoral act comparable only to the action of Hitler’s Nazi’s on a hapless Czech Govt.

Thirty-five Indian and foreign journalists who were aboard the five Antonov-32s wrote the script that the Indian government wanted them write about how they violated a tiny and helpless country sovereignty and independence trying free itself from a terrorist menace that was created and nurtured by Indian itself was never mentioned.

‘The offer came two days after Indian transport planes with fighter escorts, on only 35 minutes’ notice to Colombo, dropped food parcels over the Jaffna Peninsula, the stronghold of armed Tamil rebels who have been under Sri Lankan military attack. India, which has a Tamil population of over 50 million, said the supplies were intended for besieged civilians.

‘Fighting was still going on in the peninsula today. And in southern Sri Lanka seven Tamil prisoners were killed trying to escape from a center housing nearly 4,000 political detainees, the Government said.

‘Mr. Hameed said in an interview in his office that China and Pakistan had been among the nations offering support to Colombo after the Indian airdrop on Thursday. He called India’s actions a ”naked violation of Sri Lanka’s independence and an unwarranted assault on Sri Lanka’s territory and sovereignty.’

This “Parripu drop” was the forerunner to Indo-Lanka Accord which was forced down Sri Lanka under intimidation and duress.

What is undeniable is that India demanded the Vadamarachchi operation to cease, to confine the troops to barracks and used they terrorists armed and trained by themselves as an excuse to force Sri Lanka to sign the Indo-Lanka Peace Accord with India so that it could invade Sri Lanka using the Indian army.

The use of this force on Sri Lanka was to ultimately hand over Sri Lanka’s sovereignty and all rights Sri lanka had on the Trincomalee port to India and to enact the 13th amendment on the pretext that it was for the welfare of the Tamils and to solve an “ethnic problem”.

It is thus clear that Indo-Lanka accord was procured by the threat of the use of force and/or the use of force in violation of the principals of International Law in article 2 (4) of the UN Charter.

Evidence of Lack of Democratic Consent for the Indo-Lanka Accord

(1) Most of the senior minsters in cabinet boycotted the ‘signing’. Only a handful like Gamini Dissnayake and Shahul Hameed attended the signing ceremony.

(2) Wide-spread rioting, death and destruction in opposition to the Indo-Lanka Accord.

(3) Assault on the Indian Prime Minster by a Naval rating in the Guard of Honour to widespread spread acclaim within Sri Lanka.

Therefore it is abundantly clear that the citizens of Sri Lanka despised the Indian interference in the internal affairs of Sri Lanka.

India has gone against the Bandung Principles, and other Multilateral International Conventions to which India is a signatory. Thus the time has come for the citizens of Sri Lanka to “go to the Supreme Court against the Government demanding that the Government publicly renounces The Indo-Lanka Accord on the basis of the above.

Subsequent events to the Indo-Lanka accord, where India has also not being able to fulfil any of it’s obligations under this Agreement and hence has no moral obligation to demand from Sri Lanka to fulfil any condition is entirely another matter.

India miserably failed to satisfy her obligations in the accord wherein she undertook to satisfy and was bound to perform and fulfil certain commitments on her part. One good example would be the commitment on India’s part to disarm the LTTE terrorists within 72 hours,

Whereas the Indian army in it’s long drawn out failed military action against the LTTE, went on to create a new terrorist group called the Tamil National Army (TNA) in the North and East of Sri Lanka to fight alongside the Indian Forces. Yet the Indian army suffered ignominy of one of her worst military debacles in Sri Lanka after the 1962 war with China wherein over 2,500 Indian Army officers and men perished in Sri Lankan soil, and that too in a battling a small terrorist group like the Indian Maoist.

The significant changes envisaged in the Indo-Lanka Accord from the Sri Lankan side to the structure and system of governance incorporated in the 13th Amendment, restricting of troops to barracks etc which were adopted by Sri Lanka due to the coercion exerted by the supposedly militarily powerful Government of India, without the same being referred to the people of Sri Lanka in whom the sovereignty rests, is a serious anomaly which the people of Sri Lanka have every right to revise to suit the country’s needs and current strategic interests.

Indian interference in the internal affairs of Sri Lanka is a serious threat the modern the Sri Lankan state and it needs rectify this situation as it moves rapidly towards economic development and prosperity.

The 13th Amendment to the Constitution and The Indo-Lanka Accord was the product of a military conflict and not a consensus amongst the citizens of Sri Lanka arrived at through a democratic processes during times of peace and reconciliation.

The military conflict is now over. The citizens should now be free to arrive at a consensus on reconciliation through home grown democratic means such as the PSC. The 13th Amendment which stems from an illegal Bilateral Agreement and it should be abolished without any further delay.

Former Acting Chief Justice Raja Wansundara in his National Revival Report states, ‘Under Article 80 (3) of the Sri Lankan constitution if the parliament wishes to review this matter, it can pass a declaratory law invalidating the 13th Amendment to the constitution. If the Speaker were to give his required certificate this would foreclose the issue and constitute a final disposal to prevent any future agitation of the matter.’

The Indian establishment brands all these processes as signs of “Triumphalism” by a so called “Sinhala Chauvinistic Regime”. Terminology concocted with one eye on the Trincomalee port with the other on the Hambantota port with no love lost for either the Tamils of Tamilnadu or Sri Lanka.

On the 29th of July 2013 we commemorate the 26th anniversary an agreement, that was forced down Sri Lanka. It started one of the darkest chapters of Sri Lankan history with death of 65,000 Sri Lankan youth who opposed another periodic Indian invasion of this country.

This dreadful accord should be nullified discarded forthwith and at all costs…..

Home » Indo-Lanka Accord a Nullity