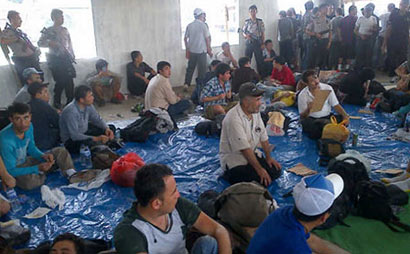 The ranks of Seribu Islands Resort Police apprehended 26 illegal immigrants originated from Sri Lanka. The 26 immigrants were caught when the motorboat they were riding on, KM Damar Jati, suffered from damage on its gearbox in the waters of Tidung Island northern coast, Monday (2/18). By the police, the illegal immigrants were evacuated to Kampung Baru Mosque, Tidung Island, to be handed over to Tanjungpriok Immigration Office to be questioned.

Head of Seribu Islands Resort Police Crime Detective Unit, Police Commissioner Adjutant Bungin Misalayuk, said the detainment of 26 illegal immigrants began when the KM Damar Jati motorboat they were riding on was stranded in the waters of Tidung Island for 12 days. “When their motor boat damaged, suddenly the captain and the sailors from Indonesia ran away and left those immigrants behind. Thus, the immigrants had to row their boats by themselves for 3 days. Their efforts were futile however, because they hit a rock in the waters of Tidung Island, until the locals found them and we secured them,” he stated, Monday (2/18).

Based on the statements of those immigrants, they were left behind by the captain and sailors of the boat who also served as guide. “Our ranks found the boat stranded in between rocks after they were floating aimlessly for 12 days. We are still recording the data of the immigrants and hunting the boat’s captain and deckhands,” uttered Misalayuk.