Injured Malinga out of Twenty20s against Australia 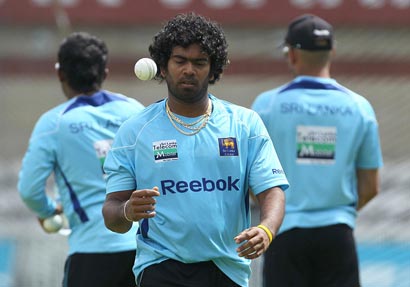 Lasith Malinga, the Sri Lanka fast bowler, has not been picked for the national team’s two-match Twenty20 series against Australia, starting August 6 in Pallekele, due to an injury. Malinga was named in the list of 20 probables for the home series, but was left out of the Twenty20s to get back to fitness for the five-match ODI series starting on August 10. Sri Lanka have drafted in uncapped allrounder Shaminda Eranga while Angelo Mathews takes over as vice-captain following the axing of Thilina Kandamby.

Also missing from the 16-man squad is batsman Chamara Kapugedera, who was part of Sri Lanka’s World Cup squad but wasn’t picked for the limited-overs matches on the tour of England. Dhammika Prasad, Suranga Lakmal, Nuwan Kulasekara, Thisara Perera, Mathews and Eranga comprise the pace department . Ajantha Mendis, Rangana Herath and Suraj Randiv are the frontline spinners, and the hosts also have Jeevan Mendis as a spin option.

Making a return to the national team are offspinning allrounder Dilruwan Perera, who last played an international game in February 2008, and middle-order batsman Chamara Silva, who played in the World Cup. Tillakaratne Dilshan was named captain for the entire tour. The limited-overs series are followed by three Tests.

2 Responses to Injured Malinga out of Twenty20s against Australia

Home » Injured Malinga out of Twenty20s against Australia