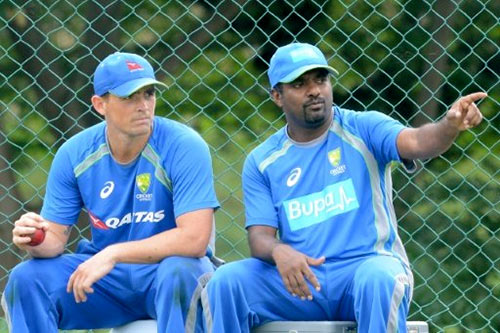 Australia will be looking to local legend and one-time bogeyman Muttiah Muralitharan to inspire them to success on his home patch as the world’s number one Test team begin a three-match series in Sri Lanka this week.

Steve Smith’s side will be desperate to reverse a poor recent away record against teams from the sub-continent when play begins in Pallekele on Tuesday, as India breathe down their necks in the race for Test supremacy.

But while Australia’s fast bowlers have been key to their success on home soil in recent years, their less celebrated spinners will have to step up to the plate against a Sri Lankan side who have been struggling of late.

Veteran off-spinner Nathan Lyon and slow left-armer Steve O’Keefe are both expected to be named in Tuesday’s starting line-up after performing strongly in the warm-ups.

Both have benefitted from working with Muralitharan, the leading wicket-taker in the history of Test match cricket who has been hired by the Australians as a consultant for the Sri Lanka tour.

Muralitharan once refused to tour Australia after prime minister John Howard branded him a “chucker”, but Smith and Australian coach Darren Lehmann have been full of praise for his influence on Lyon and O’Keefe.

O’Keefe bagged 10 wickets in a warm-up match in Colombo last week. Lyon was also impressive as he took two wickets in a tidy second innings spell.

“It’s great to have someone like that helping our spinners in this series, to give us that insight,” Smith said after Australia’s arrival on the island.

“He’s been really good around the group so far, and he’s enjoying his time with us.”

Australia’s last outing to the sub-continent saw them lose all four Tests against India in 2013 and they also lost both matches when Pakistan hosted them for a two-Test series in 2014 in the Gulf.

Sri Lanka are seen as weaker opponents, undermined by the retirements of several star names in the last two years.

But Craig McDermott, who recently stepped down as Australia’s bowling coach, said the Baggy Greens would not be taking their opponents lightly.

Since Australia’s last tour here in 2011, Sri Lanka’s two most prolific batsmen Kumar Sangakkara and Mahela Jayawardene have both retired and the team have been sliding down the Test rankings.

Sri Lanka have only just returned home from a disastrous tour of England where they failed to win any of their nine Tests and limited overs internationals.

Their squad for Pallekele has three uncapped bowlers, including pacers Asitha Fernando and Roshane Silva and spinner Lakshan Sandakan.

Sri Lanka last won a Test series against Australia back in 1999 when Muralitharan was the team’s chief destroyer.

The hosts’ skipper Angelo Mathews has acknowledged that the tourists will present a formidable — but not impossible — challenge.

“Although playing against the Aussies at home we all know that they are a tough side.” he said.

“While playing against the Aussies we should be brave and play positively, and if we do that we can beat them.”

After the match in Pallekele, the second Test will be held in Galle from August 4-8 and the third will be in Colombo from August 13-17.

5 Responses to Inspired by Murali, Australia take on Sri Lanka in Test series