International conspiracy to revive terrorism in Sri Lanka: Sri Lankan President in his May Day Message 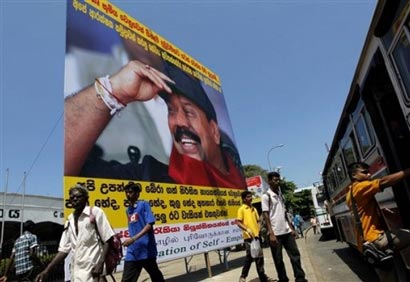 There are certain international conspiracies to give life back to terrorism which we defeated. This is a take back of the victory we achieved with enormous dedication and patience. I expect the whole working community will be united under  one banner to sfegurad the country. said Sri Lankan President in his May Day message.

“The working masses will stand united to preserve the victory the country gained by defeating terrorism” the President said
Sri Lanka celebrates the May Day ammidst protests by the masses against the controversial ‘Darusman Report’ issued by the UN panel of expert on Sri Lanka in April.  President Mahinda Rajapaksa had called for mass protests against a UN report which urged a probe into alleged war crimes committed during the fight against Tamil Tiger rebels, his office had earlier said.

President Mahinda Rajapakse in an address to his Sri Lanka Freedom Party officials said this year’s May Day rally should be turned into a “show of our strength” against international calls for war crimes investigations.

The President’s May Day message rerads;  “I remind you with pride of Sri Lanka’s higher recognition among the South Asian countries as a country which enforced the conventions of the International Labour Organisation very successfully. First and foremost I extend my gratitude for the Sri Lankan labour community for contributing fruitfully to increase the country’s economic development growth rate to eight percent.”

Compensation for male and female labourers for accidents at the workplace was also increased. Timely amendments were also brought to the Workers’ Compensation Act. Laws are already imposed to eliminate the child labour. Sri Lankan women contribute largely to the labour force. Therefore strengthening the legal provisions related to their rights and privileges is a contemporary necessity. The government has paid attention towards it.

Moreover, steps have been taken to create the necessary administrative and management methodologies to use the foreign labour in a more fruitful manner. Our expectation is to grant the benefits enjoyed by the working class of the developed countries to our general public.

3 Responses to International conspiracy to revive terrorism in Sri Lanka: Sri Lankan President in his May Day Message