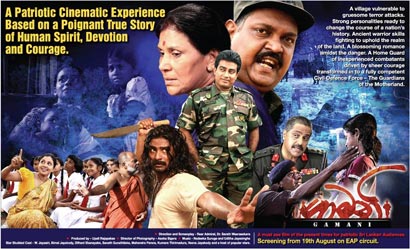 Gamani will be crossing its 50th day on Friday, October 7 marking a significant milestone in the already glittering career of Rear Admiral Sarath Weerasekara. Although such a feat in films will not earn him another medal, director Sarath Weerasekara deserves more than a medal for his bravery in taking up the challenge to make this movie which has been playing up his mind over the years.

“I am glad about the feedback the film is getting and I salute the patriotic people of this country who have always stood up for justice and fair play. But at the same time I see a lot of shortcomings in the film industry which will have to be addressed soon if we are to uplift the Sri Lankan film industry. The atmosphere should be conducive for filmgoers to enjoy a movie, but I am sad that the situation is not that conducive in many theatres, despite efforts by President Mahinda Rajapaksa to offer concessions to the film industry. Even the picture quality in most halls is so disappointing. Gamani is my genuine effort with no ulterior motives. Therefore the success of the film means a lot to me and my whole team of actors, crew members and other contributors especially the film’s producer Upali Rajapakse. In the same way a genuine effort must be taken to address issues hindering the film industry,” he said adding that the movie has been chosen for the upcoming GOA Film Festival.

“Though film direction was not even in my remotest dreams, the incidents that took place in the country provoked me to take up the challenge. I am thankful to my daughter who is in the US for sending me some valuable books on filmmaking and I must say those tips were really helpful. I had every frame drawn up in my mind and it was a matter of transforming them into reel. I took great pains to see that everything looked natural. The scene depicting the burial of 57 people who were massacred by the Tigers is one such scene which involved loads of patience. Many people say it’s the first time that a mass burial of this nature was picturised for a movie. There are some people who had not known until they saw the film, that the Tigers had been such a ruthless outfit. This is a film that arouses patriotism among all Sri Lankans. The film underscores the fact that peace and harmony among all communities is the key to ultimate happiness and a bright future for Sri Lanka. I used well-known faces even for small roles and the dividends have paid off. The roles played by Geetha Kanthi, Sanath Gunathilaka and Damitha Abeyratne are fine examples. I used Ritigala Sumedha to show the world that we boast of a natural heritage which is more than 2500 years old and that an unarmed Angampora fighter can handle ten to fifteen armed men.  The film has received Education Ministry approval for students and principals can contact the nearest cinema hall to avail themselves the special concessions offered to schools,” said Rear Admiral Sarath Weerasekara hinting that his next film might also be a patriotic one based on a period story.

“My role as a politician has indeed restricted my activities, but I will find time to contribute as a filmmaker to cater to the majority of patriotic people of this country,” he said.