It’s taken 15 years! – Ross Emerson says he no-balled Muralitharan because he was ordered! 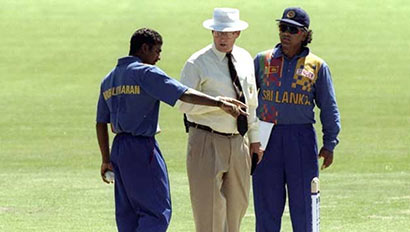 Ross Emerson has spilled the beans. It’s taken 15 years but at least now we know an injustice took place and an apology is a must. That apology must go to the man who suffered much trauma and he is none other than Muttiah Muralitharan. How many cricketers themselves heckled and jeered at him throughout, not to mention the unnecessary tests he had to undergo.  Muttiah Muralitharan not only deserves but Sri Lanka must demand an apology from Cricket Australia for 15 years of humiliation and tests that Muralitharan had to weather. Muttiah must be given an apology and it should not take another 15 years!

The Daily Telegraph Australia has revealed in an interview with Ross Emerson that he no-balled Muttiah Muralitharan for throwing because of orders from an unnamed Cricket Australia official. We need to know who he is even 15 years later.

Muralitharan was no-balled by Emerson officiating in his first international match in 1996 when Sri Lanka played against the West Indies, in Brisbane Australia.

In 1999, Emerson no-balled Muralitharan again in front of nearly 10,000 spectators in Adelaide, Australia.

The news is an affront to the game of sportsmanship. It is cheating and the culprits need to be exposed. Emerson cannot shed his guilt 15 years later through an interview and forget the damage he has done. Is cricket not referred to as a ‘gentleman’s game’. Sadly, the people that we thought were gentlemen are not behaving so.

What will the ICC do, probably nothing because the heads of the ICC are people brought up under apartheid rule.

This revelation should not be simply forgotten.

A great injustice has been done to our cricketer – a national sports hero and Sri Lanka Cricket Board should not be meek enough not to challenge Cricket Australia for an apology as well as demand that they make public the name of the official that ordered Emerson to no-ball Muralitharan. The ICC must also make a statement to the cricket public on the matter. It is only then that we can say cricket remains a gentleman’s game, so far it looks to be nothing like a gentlemen’s game and more like a business and money generating industry.

It is apparent that injustice to Sri Lanka is taking place in not only the realm of cricket and we must wonder whether there is a bigger picture to the entire scenario.

Australian umpire Ross Emerson called Murali for throwing at the Adelaide Oval, and got a shock of his life when Captain Ranathunga got back at him in style. At the end, Murali had the last laugh. He went on to score the winning run, and Ross Emerson never umpired again.

4 Responses to It’s taken 15 years! – Ross Emerson says he no-balled Muralitharan because he was ordered!