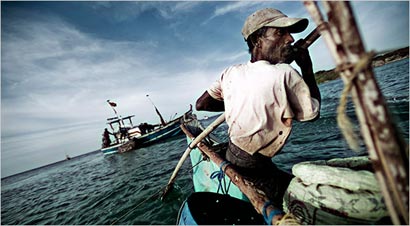 Fishermen from Jaffna have demanded that the Sri Lankan government frame a comprehensive scheme to safeguard their interests when they experience huge losses caused by poachers.

The need for such a scheme has been felt in the light of a recent incident near Neduntheevu or Deft Island in the Jaffna district wherein 27 out of 30 nets belonging to a Karainagar-based fisherman were said to have been damaged by trawlers run by unknown persons.

On the same day, the Sri Lankan authorities had apprehended four fishermen, hailing from India, along with a trawler, for allegedly poaching in Sri Lankan waters.

The fisherman concerned, Loganathan, claims that even his three other nets are of no use as they too have suffered irreparable damages. In monetary terms, his loss comes to about SLR 2.5 lakh. “I do not know how I will be able to mobilise this much money and get back to regular fishing,” says Mr. Loganathan.

Replying in the negative to a query whether the government has got any scheme to compensate fishermen who are affected by acts of poachers, M.C. L. Fernando, Director General of Fisheries and Aquatic Resources, says fishermen can join insurance schemes. “This is only optional. My department has been encouraging them to take insurance policies.”

But, Mr Rajachandran says fishing nets are left out of the ambit of insurance schemes, which cover boats while Mr. Kannah points out says there are genuine difficulties in providing the cover to nets.