The Chairman of Sri Lanka Business council of Japan Mr.Jagath Chandana Ramanayake officially handed over two Ambulances worth eight million rupees to President Mahinda Rajapaksa at Temple Trees on 05th January. Two fully equipped Ambulances are donated as a gift by Mr. Takano Kiyoshi, Minister of Ibaraki prefecture, Japan for the use of emergency care and transportation of patients in the health sector in Sri Lanka.

President Rajapaksa said “we want to say big thank you to Minister Takano Kiyoshi and all the members of the Sri Lanka Business Council of Japan who have contributed for the donation”. Sri Lanka business council of Japan coordinated the shipment to Sri Lanka and provided funds for shipping and all other costs.

Pictures are seen here Mr Jagath Chandana Ramanayaka hands over the keys and documents of the Ambulances to the President and checking the facilities and the conditions of them.

Chief of Staff of the President, Mr.Gamini Senarath is also in the pictures. 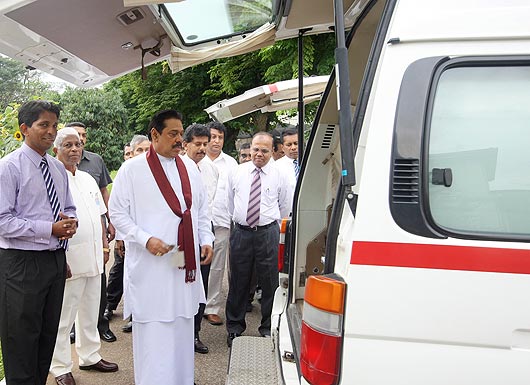