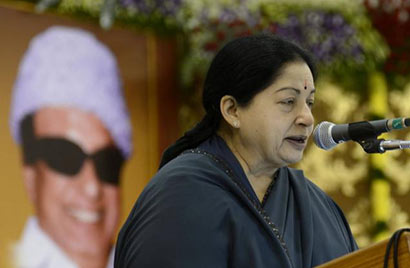 Reiterating her demand for imposing an economic embargo on Sri Lanka till Tamils in the country were fully and honourably rehabilitated and granted rights on a par with the Sinhalese, Chief Minister Jayalalithaa on Wednesday called upon the Union government to work in tandem with other countries to ensure that those responsible for the war crimes were made to face an international trial.

She said India should also hold discussions with the U.S. and like-minded countries and draft a United Nations resolution against Sri Lanka.

In this context, she recalled a resolution adopted by the Assembly in 2011 demanding an economic embargo on Sri Lanka.

Reacting to the photographs, carried by The Hindu and other sections of the media, on the killing of Balachandran, son of LTTE leader Prabakaran, the Chief Minister described the killing as “a war crime of gravest nature and an unforgivable act.”

She said, “It is an inhuman act of extreme cruelty. Balachandran was only12 years old and was just a child. He had not committed any crime,” she observed, adding that the boy was killed simply because he happened to be the son of Prabakaran. She likened the massacre of Tamils in Sri Lanka to the Nazi destruction of Jews in Germany. The evidence for the killing of Balachandran and the systematic killing of other Tamils “reveals the mindset of the present government in Sri Lanka,” she said.

DMK president M. Karunanidhi said the videos released by Channel 4 and the pictures published by The Hindu unmasked the true face of Sri Lankan President Mahinda Rajapaksa, who sought to project himself as a saint. Mr. Karunanidhi said while Western countries were ready to support the US-sponsored resolution against Sri Lanka at the UNHRC, India was yet to announce its stand on the issue.

“Its silence pains us. People in Tamil Nadu expect India to take forward the resolution,” he said, adding that the Union government should not try to bail out Sri Lanka. (Courtesy: The Hindu)