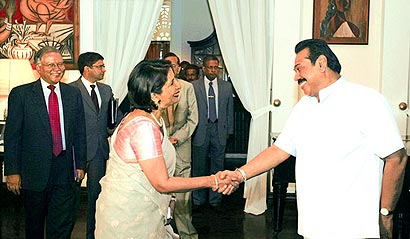 Sri Lankan authorities yesterday said that it is the consistent policy of Sri Lanka to treat in a humanitarian manner all foreign fishermen including those of Indian origin who cross into Sri Lankan waters.

Authorities said given the very close bilateral relationship between Sri Lanka and India any development which impacts on the well-being of the Indian fishing community pursuing their livelihoods in the waters between the two countries, is of the utmost concern to Sri Lanka.

This was convened to Indian Foreign Secretary Nirupama Rao during her high level talks with the Government.

It was also decided that the next meeting of the Joint Working Group on Fishing would be convened at an early date, which would, inter-alia, address various issues relating to fishing by the two sides.

The Joint Working Group would also address the proposed Memorandum of Understanding on development and cooperation in the field of fisheries. It was decided as well to enhance and promote contacts between the fishermen’s associations on both sides, since such contacts have proved to be mutually beneficial.

During the discussions, Foreign Secretary Rao expressed the deep concern of the Indian Government at the recent violent incidents in the waters between India and Sri Lanka, which had resulted in the tragic death of two Indian fishermen.

She stressed that these incidents should be fully investigated and all steps taken to prevent their recurrence in future.

The Government of Sri Lanka is committed to ascertaining the facts behind the incidents.

While continuing with further inquiries, the Sri Lankan authorities have requested that additional information be made available by the Indian side. Both sides agreed that the use of force cannot be justified under any circumstances, the authorities said.

The two sides noted that the Joint Statement on Fishing Arrangements of October 26, 2008, which had put in place practical arrangements to deal with bona fide fishermen crossing the International Maritime Boundary Line (IMBL), had led to a decrease in incidents. They agreed on the need to discuss arrangements based on the current situation so as to strengthen the safety and security of the fishermen.